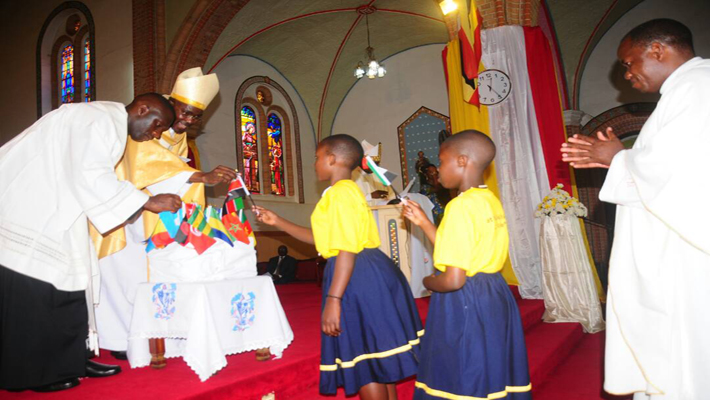 KAMPALA, JULY 31, 2018 (CISA)-Archbishop Gabriel Mbilingi, President of the Symposium of Episcopal Conferences of Africa and Madagascar (SECAM) has acknowledged the initiative of Church leaders in Africa to speak in one voice on issues affecting the Church.

Speaking in his homily during the inaugural Mass of the conference’s Golden Jubilee celebrations held at Lubanga Cathedral in Kampala on Sunday, the Archbishop urged the leaders to remain steadfast in the process of evangelization.

His sentiments were echoed by the Vice President of SECAM Bishop Mathieu Madegal Lebouakehan who in his address, insisted that the engagement of all faithful is a sure move towards promotion and growth of the church in the region.

“Unity and collegiality is significant so that dioceses, national and regional conferences strive to have common activities in living through the jubilee year,” said Bishop Lebouakehan.

Fr Koma-Koma described the objective of the jubilee year as to, “celebrate in thanking God for His wonders and marvelous deeds, the gift of Baptism and of the church, to ponder on the progress made so far, with the aim of deepening our roots in Christ and to engage ourselves resolutely bin faith in proclamation of the mission of the gospel in words and actions.”

The celebrations of the golden jubilee year are guided by the theme; Church, Family of God in Africa, Celebrate your Jubilee! Proclaim Meet and Welcome Christ our Savior.

SECAM was launched in July 1967 by Blessed Pope Paul VI, his first ever visit of Pope to Africa.