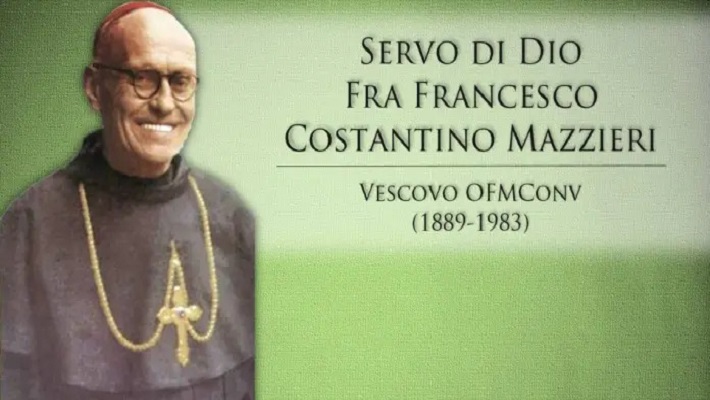 VATICAN, APRIL 12, 2022 (CISA)- “Mother Church, after the long study on the life and virtues of our beloved bishop Mazzieri, which started with the diocesan investigation in Ndola in the years 2000-2001, and the preparation of a summary of all the material (called in Latin: Positio), culminated in the assessments of two groups of highly expert theologians (in January 2021 and March 2022), has recognized that bishop Mazzieri lived a holy life,” reads a statement released by the Catholic Diocese of Ndola, Zambia.

The statement follows a meeting between Pope Francis and His Eminence Most Reverend Cardinal Marcello Semeraro, Prefect of the Congregation for the Causes of Saints, in which the Holy father “authorized the same Congregation to promulgate the decrees concerning the heroic virtues of the Servant of God Francesco Costantino Mazzieri, of the Order of Friars Minor Conventual, Bishop of Ndola; born on 25 March 1889 in Abbadia di Osimo (Italy) and died on 19 August 1983 in Ibenga (Zambia).”

In explaining the meaning of the decree, the Catholic Diocese of Ndola said “the late Bishop Mazzieri can now be addressed to, as “venerable,” while adding, “But Mother Church in her long tradition of evaluating the lives of her children, proposed as models to the rest of the faithful, has been relying on the presence of physical miracles obtained through their intercession.”

“That means that “venerable” Francis Mazzieri is not yet numbered in the group of “blessed” and even less of “saints”; in order to reach each of these two stages (blessed and saint) there must be first a miracle or grace (obtained through his intercession); any such miracles or graces will have to be equally studied from the medical point of view as well as from the theological one, and go through the assessment of a similar group of experts, has it has been for his life,” read the statement.

The statement also encouraged the faithful to support the process by continuously praying through the intercession of venerable Francis Mazzieri, “and if anything happens to your sick brothers and sisters, inform your parish priest or directly the diocesan offices about it.”

Bishop Francesco Costantino Mazzieri in 1930 felt the call to evangelize far from Italy and was sent with six confreres to what is now Zambia, in the district of Ndola (then Northern Rhodesia), a British colony at the time.

According to a Vatican report, for 36 years he gave witness to pioneering evangelization that helped the Church grow despite the difficult and impervious conditions. He chose to reside in the rural area of Santa Teresa (Ibenga-Zambia) and his humility together with his great charitable sensitivity worked heroically taking care of lepers. He was loved by the people and died in 1983 and is always remembered for his holiness.

In the Catholic Church, The Venerable is the title used for a person who has been posthumously declared “heroic in virtue” during the investigation and process leading to canonization as a saint.