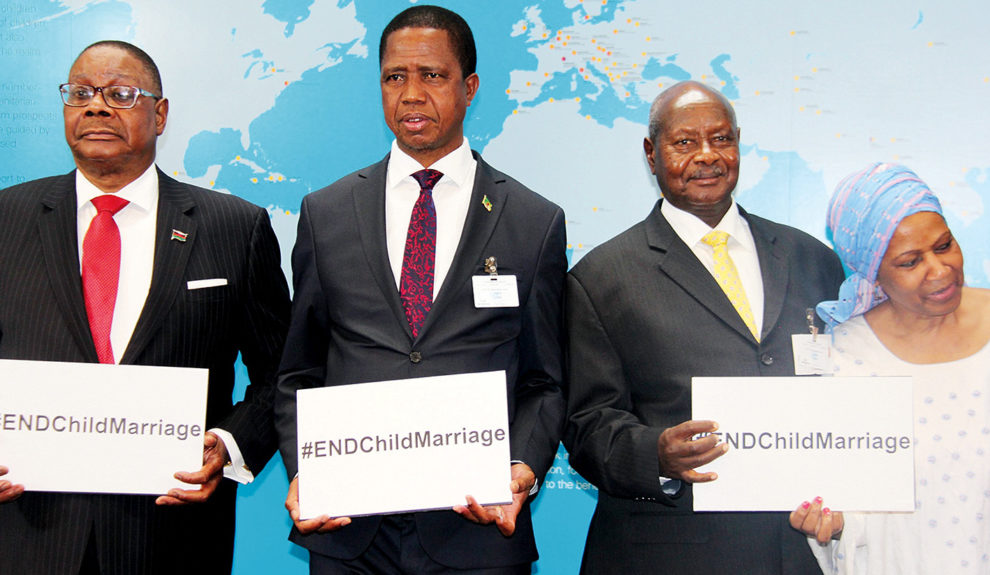 CISA SEPTEMBER 19, 2017(CISA) – Three African heads of state have pledged to support efforts in ending child marriage in Africa by 2030.

Presidents Edgar Lungu of Zambia,Yoweri Museveni of Uganda and Peter Mutharika of Malawi said that they were committed towards ending child marriage completely in Africa, reported African News Network.

“We cannot harvest the best potential unless we stop early marriage,” said President Mutharika adding “that every child must be empowered to reach their highest potential in life.”

After a two-year parliamentary process and subsequent approval in February, President Peter Mutharika signed a constitutional amendment in April this year quashing a previous practice where minors aged 15 years and above can marry with consent from their parents.

President Lungu acknowledged that the problem is ongoing in Africa and girls who marry young have been denied their rights.

On his part, President Museveni said freedom of choice will come only if girls can be independent of parents and husbands.

He added that policies against the practice are being implemented and the goal will be attained.

They leaders made the pledge today ahead of the opening of the 72nd United Nations General Assembly together with the African Union Social Affairs Commissioner Amira Elfadil at an END Child Marriage event organised by UN Women in New York.

The African Union Social Affairs Commissioner Amira Elfadil called on all men and the youth to participate in ending child marriage in Africa.

African countries account for 15 of the 20 countries with the highest rates of child marriage globally and the region has the world’s highest prevalence of adolescent pregnancies, according to reports.

This year, Malawi joined the likes of Gambia and Tanzania to ban child marriage after it rose the legal marriage age to 18.