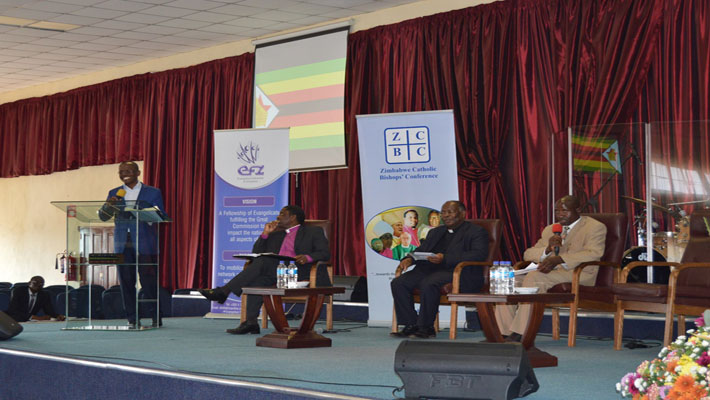 HARARE, OCTOBER 11, 2019 (CISA)-Zimbabwe Heads of Christians Denominations (ZHOCD) has called for the suspension of political contests for seven years in a bid to steer Zimbabwe towards economic recovery.

In a statement released after a meeting at the Africa Synod House, the clerics said the political break will give room to rebuild trust, confidence, and dialogue towards a recovery in a non-competitive political environment.

“We have prayerfully come to the conclusion that in light of the current political paralysis, deepening mistrust and the dehumanizing economic decline, the nation will need to take a bold decision to address the root causes of our national challenges that have a very long history and will not be fully resolved by one entity,” reads the October 7 statement.

While expressing their concerns on failure of the ruling party and main opposition party to find a workable collaboration, the religious leaders warned that continuous politicking will expose the citizens to continuous suffering.

“…the failure of the nation to fully bring healing and mutually acceptable closure to the long past, immediate past and recent past means that hatred fossilizes and the propensity for revenge grows,” they said.

The church leaders noted that the current political environment is not conducive for inclusive participation for Zimbabweans.

ZHOCD in solidarity with different election observers and independent commissions has proposed national dialogue to find a solution to Post Election Violence, which has been characteristic of every election since 2000.

“We must rescue this situation by providing, not yet other piecemeal solutions. What we need is a proper break with the current paralysis and move towards real renewal and transformation.”

Zimbabwe Heads of Christians Denominations (ZHOCD) which made up of Evangelical Fellowship of Zimbabwe (EFC), Union for the Development of Apostolic Churches in Zimbabwe Africa (UDACIZA), Zimbabwe Catholic Bishops’ Conference (ZCBC), and Zimbabwe Council of Churches (ZCC) believe that a breakaway from politics will mark the beginning of a mending of a broken country.