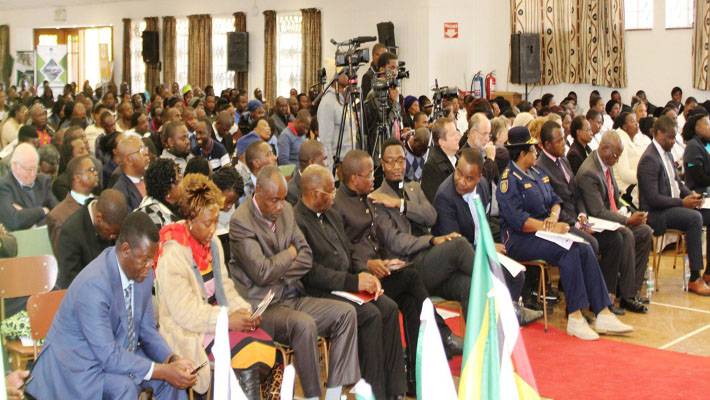 HARARE, JULY 9, 2019 (CISA)– “While dialogue must happen at different levels, the youth are a key group and this is an opportunity for the nation to engage youths in nation building,” Fr Fradereck Chiromba, the Secretary General of Zimbabwe Catholic Bishops Conference (ZCBC) told young people attending the Political Parties Youth Dialogue in Harare on June 7.

The meeting was convened by the Catholic Commission for Justice and Peace (CCJP) in partnership with the Zimbabwe Heads of Christian Denominations (ZHOCD) in politics, in a bid to promote an inclusive national dialogue.

“We must look beyond racial lines and politics and engage all youths. It must be multifaceted,” Fr Chiromba said, adding that the Church’s goal is to promote reconciliation, national cohesion, and a common vision, hence the launch of the national dialogue framework at the National Prayer Breakfast Meeting held on February 7.

He said dialogue may not be the ultimate solution for the crisis the country is facing but the cohesion will help resolve some of the challenges.

Speaking during the forum, Gift Ostallos Siziba, the newly elected Movement for Democratic Change (MDC) Secretary General decried the involvement of some state actors, who complicated the conduciveness of the dialogue the environment.

“The idea is good and dialogue is key, but we must find something attractive, something not political that brings young people together to interact and discuss about the Zimbabwe we want,” said Gift.

ZANU PF youth leader, Lewis Matutu stressed on the need for the young people to dialogue, interact and decide on the Zimbabwe they want.

“Dialogue is key among young people and we need more and more platforms for young people to discuss issues, even non-political matters; empowerment, healthcare, economic issues among others because politics is not the only matter affecting youths,” he said.

The participants of the workshop also resolved to continuously engage other stakeholders on matters around a corruption free environment, unemployment and to have their voices heard in policy making.