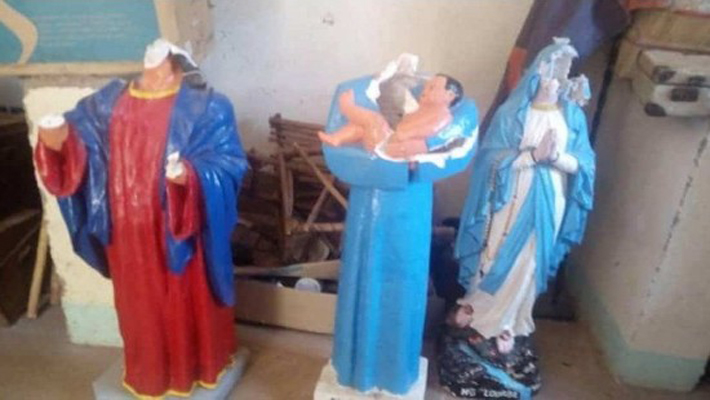 The Church was temporarily closed on Sunday, September 16 after Fr Rufin Somé, the Parish Priest discovered desecrations in the church in form of decapitated statutes and scribbled profanities on a chalkboard.

“Investigations are underway to identify the perpetrators of the desecration. Bishop Der Raphaël Kusiélé Dabiré of the Diocese of Diébougou ordered the closure of the Church and, this week, led the faithful in a Holy Mass and various acts of reparation and purification,” reported Vatican news on September 26.

Prior to its reopening, parishioners held the Stations of the Cross and confessions as directed by Bishop Der Raphaël Kusiélé Dabiré of the Catholic Diocese of Diébougou.

The bishop called for a time of prayer and forgiveness by the Catholic community that led to a prayer service on September 18 as the first step towards reparation of the church.

This was in response to Canon 1211 of the 1983 Code of Canon Law which sets out the consequences of such acts and it states, “Sacred places are violated by gravely injurious actions done in them with scandal to the faithful, actions which, in the judgment of the local ordinary, are so grave and contrary to the holiness of the place that it is not permitted to carry on worship in them until the damage is repaired by a penitential rite according to the norm of the liturgical books”.

The church is considered a popular place of worship in the area of Burkina Faso and at the same time is favourite among the pilgrims of the neighbouring Togo, Ghana, and Ivory Coast.