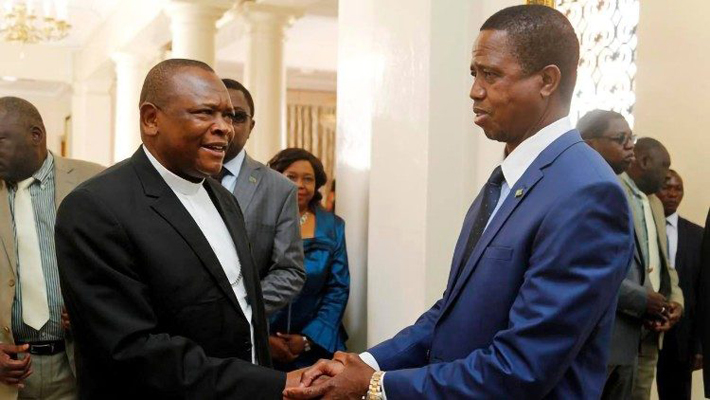 Archbishop Fridolin Ambongo the Vice President of CENCO and Coadjutor Archbishop of Kinshasa led representatives of CENCO in a meeting with President Lungu on Monday September 10, at State House in Lusaka.

“We are convinced that only a credible, transparent, inclusive and peaceful election is the real solution and peaceful way out of the socio-political crisis that our country has been going through since 2016,” reads part of the message to President Lungu, reported Vatican News.

“…with your SADC colleagues, you can help the Congolese people come out of this crisis to win the challenge of organising a worthy, credible, transparent, inclusive and peaceful election on 23 December 2018,” the bishops said.

They requested SADC to accompany the Congolese people and to also play a role in addressing some of the concerns expressed for credibility, transparency, inclusive and peaceful elections.

Some of the issues raised by the Bishops include fears that eligible voters could be left out due to the biometric voter registration; doubts about the reliability of  the national election commission (CENI)’s voting machines; a continuing tense socio-political climate in the country and the persistence insecurity particularly in the eastern part of the country.

President Lungu through his official Facebook page confirmed to have met DRC Bishops Conference when they paid him a courtesy call at Statehouse.

“During our meeting, the DRC Secretary General of the Bishops’ Conference Father Donatien Nshole told me that the Church is worried with the current situation in DRC elections. The exclusion of Jean-Pierre Bemba, Moise Katumbi and three other former Prime Ministers may result in the outcome of the elections being undermined,” he reported.

He pledged to work with other SADC member states on taking steps to help create confidence in the DRC’s electoral process and ensure that the outcome of the election is free, fair and universally acceptable.

DRC is a member of the Southern African Development Community (SADC), a Regional Economic Community comprising 16 Member States. The SADC Troika on Politics, Security and Defense is formal institution of SADC with the mandate to support the achievement and maintenance of security and the rule of law in the SADC region.