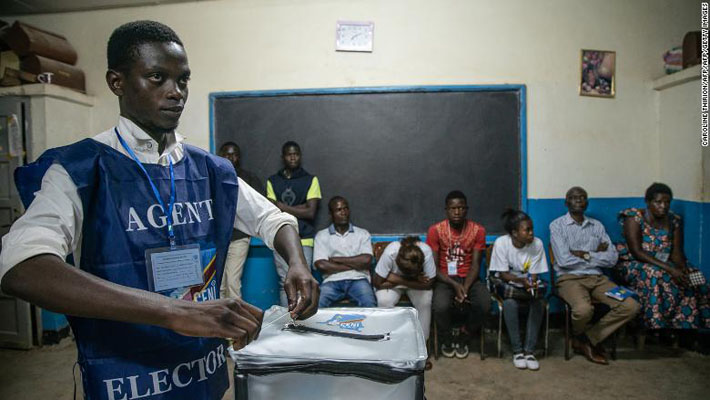 KINSHASA, JANUARY 8, 2019 (CISA)-The National Episcopal Conference of Congo (CENCO) has called on the National Independent Electoral Commission (CENI) to release the December 30, General Elections results in respect to the democratic rights of the Congolese citizens.

Speaking on the behalf of CENCO, Bishop Marcel Utembi the president of CENCO also expressed concerns on the accusations directed to Fr Donatien Nshole, the secretary of CENCO of having violated the legal provisions relating to the organization of elections in the DRC.

CENI in their letter to the bishops noted that, “the announcement of tendencies as made by Abbe Donatien Nshole is likely to poison the population by preparing an uprising for which CENCO will be solely responsible.”

In reply, Bishop Utembi told CENI on January 5 that “…the preliminary report made public by the secretary of CENCO focuses on the facts and the acts of the electoral process and not on the tendencies and the results of the poll,” reported Lacroix.

“It is the irregularities that would irritate the Congolese people, and the most serious thing that could bring the Congolese people to the uprising would be to publish results, although provisional, which do not conform to the truth of the polls,” he added.

On January 3, CENCO published its preliminary report based on the observations of its 40,000 representatives in the polling stations.

The general secretary of the CENCO, Fr Donatien Nshole, affirmed to hold the identity of the presidential candidate voted by the ballot box on December 30, at the same time inviting the CENI, “to publish, in all respects, the election results in the respect of truth and justice.”

On January 5, the electoral commission CENI through its leader Corneille Nangaa postponed the scheduled release of preliminary results from Sunday January 6 to a later date yet to be announced.