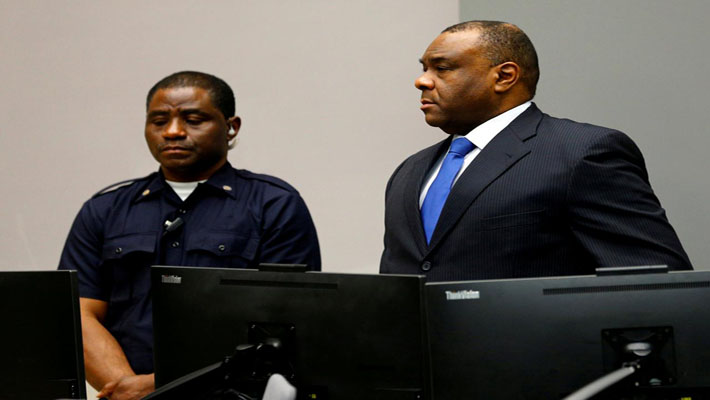 HAGUE, JUNE 12,2018 (CISA)- Former Vice President,  Jean-Pierre Bemba, has been cleared of war crimes and crimes against humanity by the International Criminal Court (ICC) following an appeal on his conviction.

In June 2016, Bemba was convicted for crimes committed by his troops in the neighboring Central African Republic (CAR) between 2002 and 2003.

“Bemba was acquitted, on appeal on Friday June 8 by the International Criminal Court, who said he could not be held criminally liable for crimes committed by his troops in the Central African Republic,” reported the standard newspaper.

Christine Van den Wijngaert, while reading the ruling of a five-judge appeal panel, noted that the judges in the 2016 case failed to take into account Bemba’s attempts to stop offenses committed by his troops.

The former Vice president was sentenced to 18 years imprisonment by the ICC trial judges after he was found guilty of war crimes and crimes against humanity committed by his private army in CAR.

Speaking to the press after the exoneration, Bemba’s lawyer Peter Haynes demanded for the immediate release of his client based on the ruling of the appeal judges at the ICC.

“He should be gone. Having acquitted him, the court has a duty to release him or act with expeditiousness,” said Haynes.

Bemba remains behind bars awaiting judgment of an appeal on a separate count of which he was sentenced for one year and a fined 300,000 Euros for interfering with witness in the course of the hearing.

The former Vice President sought asylum in Belgium after he was forced out of DRC in 2007 following a clash between his troops and government forces in 2007. Previously, he had contested for presidency against President Joseph Kabila in the 2006 elections.