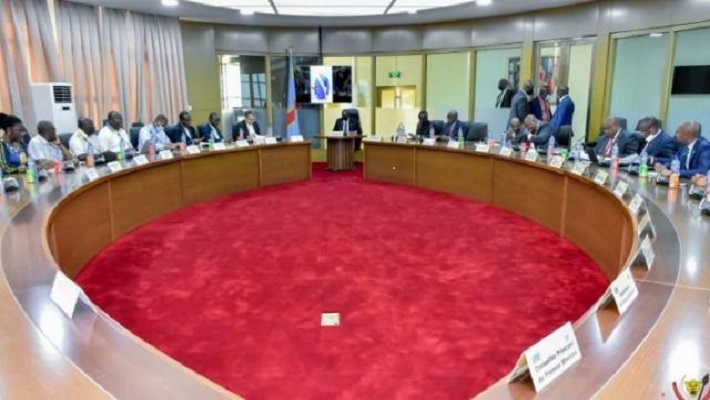 KINSHASA, APRIL 1, 2022 (CISA)-The National Episcopal Conference of Congo (CENCO) and the Government of the Republic of Congo have held their first joint meeting in preparation for the papal visit in July.

The meeting brought together Prime Minister Jean-Michel Sama Lukonde, Archbishop Ettore Balestrero the Apostolic Nuncio to DRC, representatives of CENCO and senior government officials. The focus of the meeting held on March 31, was to begin preparations for the papal visit.

According to the Minister of Communication and Media who doubles up as the spokesperson of the Government, the meeting involved informing those concerned in organizing for the Pope’s visit, the setting up of committees of the sectors concerned, to prepare road maps which will serve as a compass for each targeted sector.

“You remember that a few days ago the Prime Minister, alongside the Apostolic Nuncio and the entire hierarchy of Cenco, announced this great event, namely the arrival of the Pope. Since then, many things have been done on both sides, whether at the level of the Church or the Government,” he said.

“Today, we had agreed to work more closely to see to what extent we provide the organization that the Pope’s visit deserves. Following this meeting, the Prime Minister wrote to all of us, members of the Government, to inform us of the establishment of the commissions,” said Patrick Muyaya.

Additionally, he said the Prime Minister instructed the sectors concerned to prepare the roadmaps which will serve as a guideline for each targeted sector. “At the level of communication, at the level of logistics, of stewardship, at the level of finances and today was therefore like a first meeting since that meeting. Commissions will be set up. They will present roadmaps and therefore on a regular basis each week. There will be meetings like this until the Pope arrives, to make sure things are done as they should be done.”

While commenting on the July 2-July 5 Papal visit, Archbishop Balestrero said the visit does not only concern the Catholic Christians alone but also all Congolese regardless of their beliefs and that the visit will allow the reconciliation of all.

“The Pope comes not only for Catholics. He comes for everyone. He wants to see everyone. This is why we are committed to preparing the event well. The Church has also set up commissions similar to those set up by the Government precisely to accompany the work of preparation. The church must do the more specific preparatory work concerning the essential aspect of the Pope’s visit. The Pope comes as my brother, to lead us to Jesus but also to invite everyone to reconciliation,” he said.

Since his election in 2013, Pope Francis has visited Africa four times. He visited Kenya, Uganda and the Central African Republic in 2015. In 2017, he went to Egypt and in 2019 he visited Morocco, and later that year Mozambique, Madagascar and Mauritius.