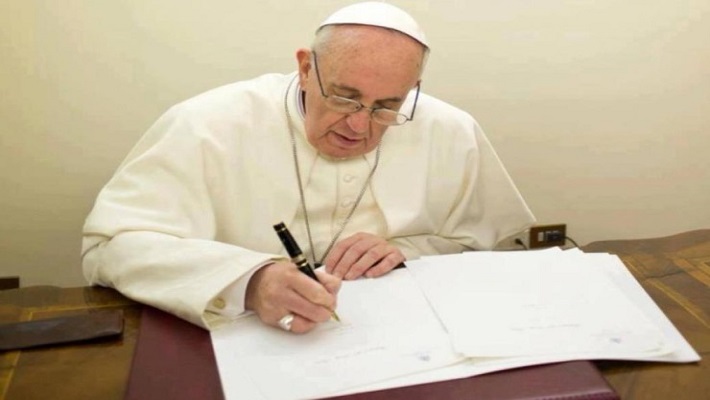 TSHILOMBA, APRIL 1, 2022 (CISA)-Pope Francis has erected the Catholic Diocese of Tshilomba and appointed Fr Sebastien Kenda Ntumba as the first bishop of the new diocese.

The diocese with approximately 792,000 Catholic faithful was curved from the Catholic Diocese of Luiza, making it a suffragan of the Metropolitan Archdiocese of Kananga.

“The newly-erected diocese of Tshilomba is situated in the civil district of Lomami. It occupies the eastern part of Luiza, including the cities of Tshilomba and Mwene-Ditu, the collectives of Katshisungu, Kanincin and Mulundu, and the sector of Kanda-Kanda.”

“It will be a suffragan of the metropolitan archdiocese of Kananga. The seat of the diocese will be in the city of Tshilomba. The Cathedral of the new circumscription will be the parish church of Saint Jacques in Tshilomba,” reads a statement issued by the Holy See Press Office  on March 25.

Until his appointment as bishop-elect , Fr Ntumba, a clergy o the diocesef Luiza  was the  parish priest of Saint Anthony of Padua in Kalomba.

Monsignor Ntumba was born on June 11,  1960,  in Tshiona, in the diocese of Luiza. In 1980 he received a diploma in Humanités Littéraires from the minor seminary of Kamponde. From 1980 to 1983 he studied philosophy at the Saint François Xavier major seminary in Mbujumayi. He was awarded a bachelor’s degree in theology from the University from the Pontifical Urban University in Rome. He was ordained a priest on 9 August 1987 in Tshibala.

After receiving a licentiate in theology in Palermo, he served as lecturer in the diocesan seminary of Agrigento from 2016 to 2017. Since 2017 he has served as parish priest of Saint Anthony of Padua in Kalomba.