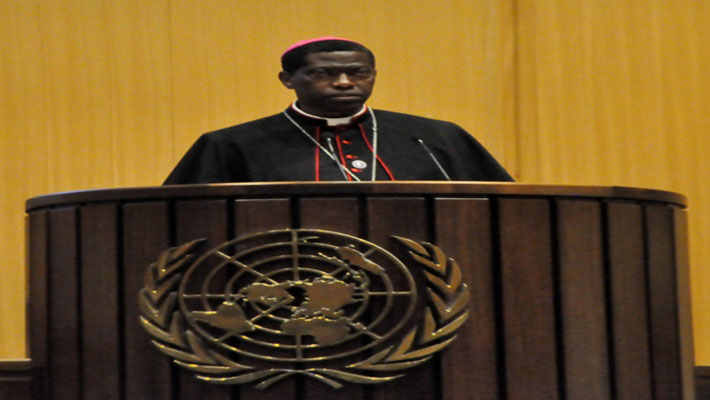 ADDIS ABABA, JULY 17, 2018 (CISA)– The Secretary of the Congregation for the Evangelization of Peoples, Archbishop Protase Rugambwa has urged AMECEA Bishops to promote a spirit of communion and harmony among themselves and within the institutions of their local Churches to build a new Africa which depends on Africans themselves.

“The church in the AMECEA region should renew her awareness of the fact that her future no longer depends on missionaries or agents of human development from other continents,” said Archbishop Rugambwa.

He further challenged the church in Africa to heed to Blessed Pope Paul VI message which advocated for local ownership of development. He challenged the African Church come up with, “new ways of becoming missionaries themselves.”

According to AMECEA online news, the prelate emphasized the need for unity of member countries despite ethnical diversity advising the bishops not to entertain ethnic conflicts that have not only divided societies but also religious institutes, Episcopal Conferences and many others causing a lot of suffering and even public scandal in some parts of the continent.

“This is why the Church in Africa feels, more than ever before, challenged by the specific responsibility of healing such divisions, starting from within the Church.

Bishop Rugambwa urged the prelates to keep the Pope’s 2015 visit to Africa alive.

He reiterated about the two major upcoming events which includes SECAM (Symposium of Episcopal Conferences of Africa and Madagascar) 50th Anniversary and the Canonization of Blessed Pope Paul VI who manifested great love for Africa saying that, coincidentally, his canonization will take place just a few months ahead of the 50th Anniversary of SECAM, which he himself launched in 1969, in Kampala.

Fr Ferdinand Lugonzo, the Secretary General of the Association of Member Episcopal Conferences in Eastern Africa (AMECEA) also called upon the member associates to come up with strategies which will strengthen the unity and cooperation of the church in the region.

“Let us think more of what we have in common and what we can do together in building a strong church within the region,” he said.

The AMECEA plenary Assembly kicked off on Friday, July 13 and is expected to end on Monday, July 23.