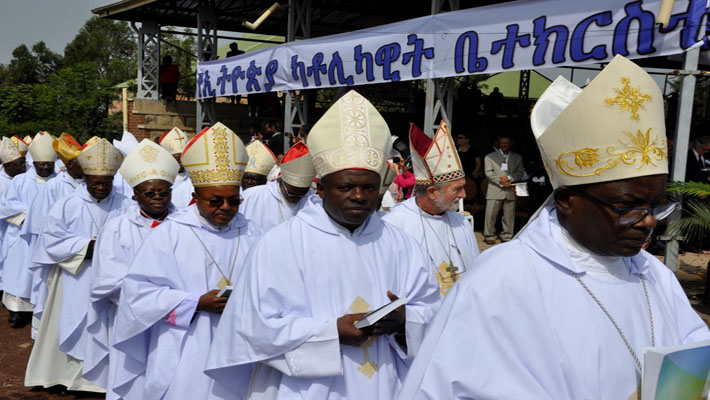 ADDIS ABABA, JULY 17, 2018 (CISA) – The Vatican Media, through the Prefect for the Dicastery for Communication has pledged to continue working with Bishops of the Association of Member Episcopal Churches of Eastern Africa (AMECEA) in spreading the gospel.

The Prefect of the Dicastery for Communication, Dr Paolo Ruffini, re-affirmed this commitment in his address to the AMECEA Bishops during the July 15 opening of the 19th AMECEA Plenary Assembly in Addis Ababa, Ethiopia.

“…as AMECEA you can count on continued collaboration with the Dicastery for Communication. In the future, it is to be hoped that we can collaborate more closely in the World Day of Social Communications – a day that celebrates the Holy Father’s message. Furthermore, apart from bringing the Gospel message and the Holy Father’s voice into the homes of Catholics, the Dicastery is determined to bring to the world, news about the vibrant Church of Africa – in all its successes, blessedness but also with its challenges and pain,” he said.

Dr Paolo further lauded the progress that has been made in investing in Diocesan Radio stations especially in the AMECEA region since the Special Assembly for Africa of the Synod of Bishops in 1994.

“AMECEA countries invested heavily in Diocesan Radio stations. This investment has been prophetic and served the Church of this region well. Over the years, in collaboration with Vatican Radio, your diocesan radio stations have not only brought the Gospel but also the voice of the Holy Father to many a Catholic home,” he noted.

The Holy Father in May 2017, during the Dicastery’s first-ever plenary assembly, encouraged that given the new digital culture throughout the world, digital media would need to be part of a primary platform for spreading the Gospel.

“… Pope Francis in that historical message of May 2017 also made categorical his wish that attention and care be accorded to countries with little access to new digital technologies. The reform of the Vatican media would neither neglect nor abandon such countries – a significant number of which are in Africa. Vatican Radio to this day continues to broadcast on new digital platforms but also maintains its traditional outlets such as shortwave frequencies for countries that still need this service,” said Dr Paolo.