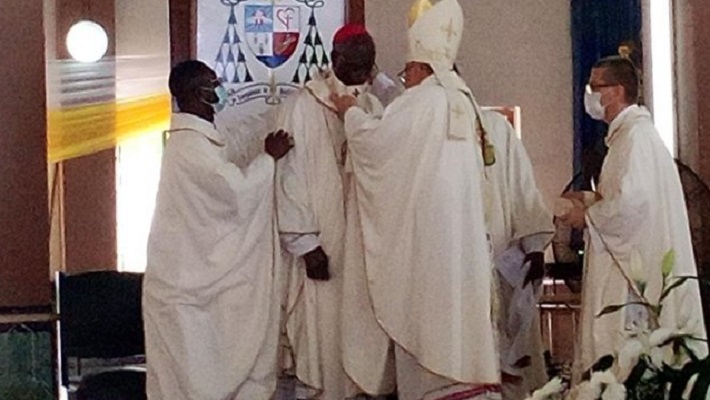 ACCRA, OCTOBER 16, 2020 (CISA)– His Excellency Most Rev Henryk Mieczyslaw Jagodzinski, the new Apostolic Nuncio to Ghana on October 15 imposed the pallium on Archbishop John Bonaventure Kwofie of Accra during his inaugural Mass in Ghana.

“I impose up on you the pallium taken from the altar of St Peters Confession as a sign of metropolitan authority. Let this pallium which you may wear within your province be there for you as a symbol of unity and a sign of communion with the holy see,” Archbishop Jagodzinski said as he led the rite at Holy Spirit Cathedral in Accra.

Present during Mass were Member bishops of the Ghana Catholic Bishops Conference led by Archbishop Phillip Naameh, President of GCBC and Archbishop Palmer Buckle, Vice President of the bishop’s conference.

In his homily, Archbishop Naameh assured of the cooperation of the church to the new nuncio in Ghana as he begins his pastoral work in the country.

“I also like to thank the nuncio for conferring to the Archbishop of Accra the pallium the symbol of metropolitan authority and the symbol of deep unity with the Holy Father who is ably represented in this Eucharist by the apostolic nuncio,” he said.

Archbishop Naameh also asked Ghanaians to, “Point out the hypocrisy that is sometimes with us and feel also called calls to reinstate justice and peace especially now in this climate when Ghanaians are preparing themselves to go to the polls in the early part of December and wish for ourselves that this our election will come out peacefully.”

The nuncio conveyed greetings from Pope Francis saying before he came to Ghana he had an audience with the pope and shared a lot about Africa.

“Recently holy father signed the encyclical about the brotherhood “Fratelli Tutti” and here I feel really the force of this encyclical. Next time I get the opportunity to meet the holy father I will tell him that in Ghana before encyclical was promulgated already we lived brotherhood,” Archbishop Jagodzinski said acknowledging the love and hospitality accorded to him by the Church and the people of Ghana.