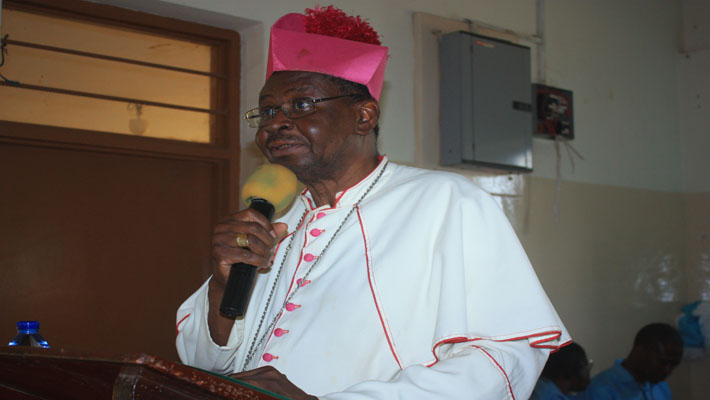 ACCRA, MARCH 30, 2021 (CISA)-Archbishop Phillip Naameh of Tamale has condemned the publication of controversial textbook that vilify the Ewe community in Ghana saying the action puts the government in bad light.

Speaking in a TV interview on the matter, Archbishop Naameh said it is the priority of government to unite all the ethnic groups in the country rather than disunite.

“We should be talking about social cohesion among Ghanaians as one family so if a textbook is drawn up in a way that denigrates the dignity of a particular ethnic group, this is something not even worthy of the pre-independence situation of Ghana,” he said on March 23.

While terming the publication of the textbook “bad for Ghana” Archbishop Naameh who doubles as President of Ghana catholic Bishops Conference noted that “We have come such a long way that no matter what ethnic group is we are growing together into one people. And that should be this strategy of every government to wield the about 52 different ethnic groups into one people.”

“So to draw up a textbook which seeks to denigrate the dignity of one ethnic group is not worthy of the government at this time,” he added.

Raising the concerns by the people on the contents of the book, Samuel Okudzeto Ablakwa Member of Parliament for North Tongu stood “To ask Minister responsible for Education whether the publications titled: History of Ghana, Text Book 3 by Badu Nkansah Publications authored by Badu Nkansah and Nelly Martinson Anim and Golden English Basic 4 authored by Okyere Baafi Alexander both of which contain bigoted content targeted at the Ewe ethnic group have come to his Ministry’s attention; were they approved by any of his Ministry’s agencies and what steps Government is taking to purge our schools and book shops from offensive, divisive and incendiary publications of this nature?”

Although the book has been recalled from the market, Archbishop Naameh referred to the publication of the book as unbefitting of President Nana Akufo-Addo and his administration.