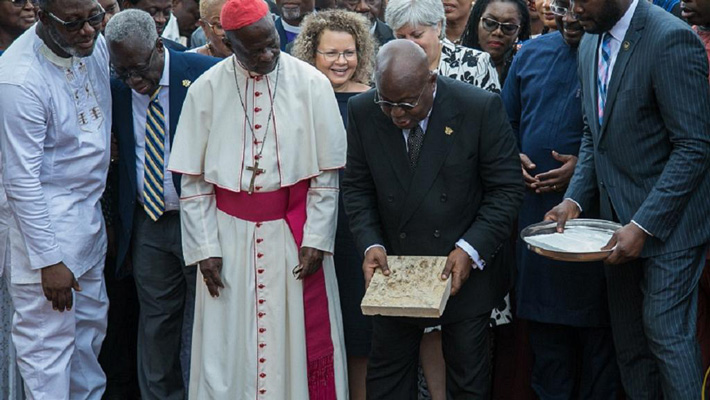 The sacred stone was put in place by President Akufo-Addo when he laid the foundation stone of the Cathedral whose actual construction began March 6 as the country marked the 63rd Independence Day anniversary.

According to Ambassador Cooper, the stone will symbolize the sacredness of the land earmarked for the project as Christians regard Jerusalem to be the most sacred site in the world.

“Israel’s involvement in the construction of the Ghana National Cathedral will strengthen ties between the two countries,” she said.

President Akufo-Addo noted that the facility will not just be like any other national monument but will be the rallying point for the Christian community to come together to worship, to pray and to promote deep national conversations on the role of faith in building Ghana.

“It will house a Bible Museum, and it will be an iconic infrastructure for national, regional and international pilgrimage and tourism. It will be a monument to religious liberty. Its construction deserves the full support of the nation,” he said.

The cathedral is projected to have a seating capacity of 5,000 with chapels, a baptistery, a music school, an art gallery and a Bible museum.

It will also serve as a venue for formal state occasions of religious nature such as state funerals, thanksgiving services among others.

“…since gaining our freedom from the colonial power sixty-three years ago on the 6th of March 1957, Ghana has so far been speared civil war, famine, and epidemics,” the president said.

“We are certainly no better than the other nations in our neighborhood who have been confronted with these challenges. I believe it is by the grace of God that we have been preserved and sustained. The construction of the Cathedral will be an act of thanksgiving to the Almighty for His Blessings, Grace, Favour and Mercies on our nation,” he added.