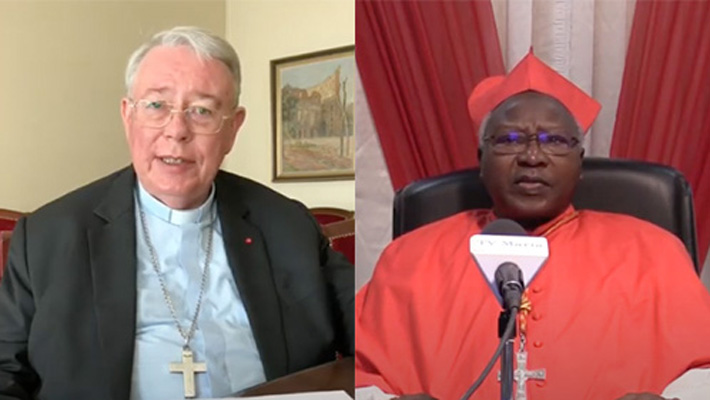 ACCRA, JUNE 12, 2020 (CISA)-The Symposium of Episcopal Conferences of Africa and Madagascar (SECAM) and the Commission of the Bishops’ Conferences of the European Union (COMECE) have called for partnership in Integral human development, integral ecology, human security and peace, people on the move, Churches and faith-based organizations between Africa and Europe.

In a June 10 Joint Statement by the Presidents of COMECE and SECAM, Jean-Claude Cardinal Hollerich SJ and Philippe Cardinal Nakellentuba Ouédraogo titled, “For a people-centered, just and responsible partnership between our continents” they noted that the upcoming EU-AU Summit in October presents a unique opportunity to shape the intercontinental political and economic relations towards an equitable and responsible partnership that puts the people at its Centre.

“The Catholic Church on both continents shares the concern for the many persons, families and communities, particularly those in situations of vulnerability and weakness, affected by extreme poverty and hunger, persisting lack of an equitable access to basic social services, corruption, violence, terrorist attacks and persecution against vulnerable religious communities, as well as the exploitation of natural resources and environmental degradation,” they said.

The prelates expressed belief that the principles and values of human dignity, solidarity, the preferential option for the poor, the universal destination of goods, the promotion of the integral human development, the responsible stewardship of all Creation, and the pursuit of common good are necessary guidance and orientation in shaping the respective policy responses and actions.

“At a time when our two continents as well as the entire world have been hit by the Covid-19 pandemic and its devastating consequences, we are firmly convinced that Africa and Europe could become the engines for a reinvigoration of multilateral cooperation by reinforcing their long- standing ties marked by our common roots and geographical proximity,” they noted.