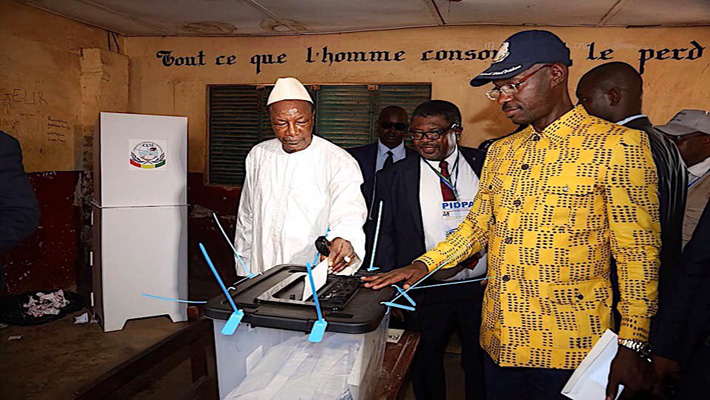 CONAKRY, MARCH 24, 2020 (CISA)-Guineans on March 22 held a referendum to lift presidential term limits in spite of threat posed by the coronavirus pandemic.

“A message of peace and solidarity, we have taken all the measures, you saw that everywhere there is hand washing, people are keeping a distance from one another, because even if we don’t have many cases, for the moment we have three.  …so I hope that everything will happen in peace and tranquility, that the people of Guinea, like in 1958, will show their maturity,” President Alpha Condé said on a March 22 twitter post.

The vote has been contested by opposition groups saying it is a ploy by President Condé, 82 to seek for presidency for a third term. President Condé’s final term is expected to end in December.

The new constitution would impose a limit of two six-year terms, up from the current two five-year terms.

According to a statement released by the National Front for the Defense of the Constitution (FNDC), a coalition of opposition and civil society groups, security forces carried out massive arrests, fired blindly, cruelly molested (and) killed at least 10 people during the protests.

A coalition of opposition and civil society groups, the National Front for the Defense of the Constitution (FNDC) has been demonstrating against the referendum, and called for further protests this week on Monday and Tuesday.

“The people of Guinea rose up courageously to say no,” said FNDC spokesman Ibrahima Diallo.

Guinea has three confirmed cases of the new coronavirus.