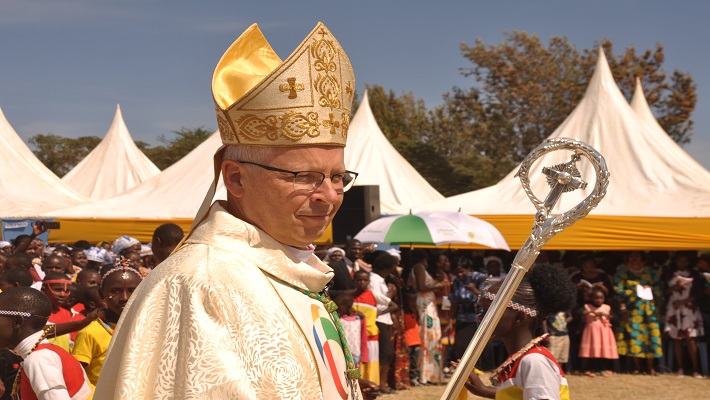 MARALAL, OCTOBER 28, 2022 (CISA)– Archbishop Hubertus Matheus Maria van Megen, the Apostolic Nuncio to Kenya and South Sudan has expressed closeness with the people suffering from a persistent and severe drought that has ravaged the country, amidst increased warnings of inaction from the government by UNHCR.

“We want to include all those people in our prayers today, who have lost their livelihood, who are on the move looking for greener pastures. It should be our prayer that the good Lord will make it rain over those desert places. Let the Lord be faithful to his word that he is a good and gracious Lord, full of mercy, who makes it rain over the good and the evil, shower ooh heavens from above and let the skies rain down righteousness,” prayed the nuncio in his homily during the episcopal ordination and installation of Rt Rev Hieronymus Joya as the second bishop of the Catholic Diocese Maralal on October 22.

As the multitude joined in jubilation to welcome the new bishop, the nuncio said the celebration should take into account the many people struggling in those regions. “They struggle in the bush, those who have sleepless nights on how to feed their children and themselves. People who are thirsty, sick and hungry; who are desperately looking for a way out.”

Archbishop van Megen also appealed for an end to the spate of banditry attacks and killings that are predominantly present within pastoralist communities, with the recent banditry attack claiming 11 lives of police officers in Turkana.

“Merciful God, give us safety and security that banditry and attacks, that stealing a murdering may come to an end,” implored the nuncio.

The Catholic dioceses of Maralal, Marsabit, Lodwar, Garissa, Isiolo and Kitui are some of the adversely affected regions in counties that are in the alarm drought phase, according to the National Drought Management Authority (NDMA).

Filippo Grandi, the United Nations High Commissioner for Refugees (UNHCR), as he concluded a five-day visit to Somalia and Kenya on October 25, also called on global leaders to spare no efforts in assisting countries in the Horn of Africa to break the cycle of conflict and climate crises.

“The drought impact in Kenya is not in the headlines, but it deserves as much attention from the international community,” said Grandi, adding “We must get the resources to do more for these arrivals from Somalia and affected Kenyans too.”

Grandi met with Kenyan President William Ruto and reaffirmed UNHCR’s commitment to work closely with his new administration on protection and solutions for refugees as well as encourage more developmental support to host communities.