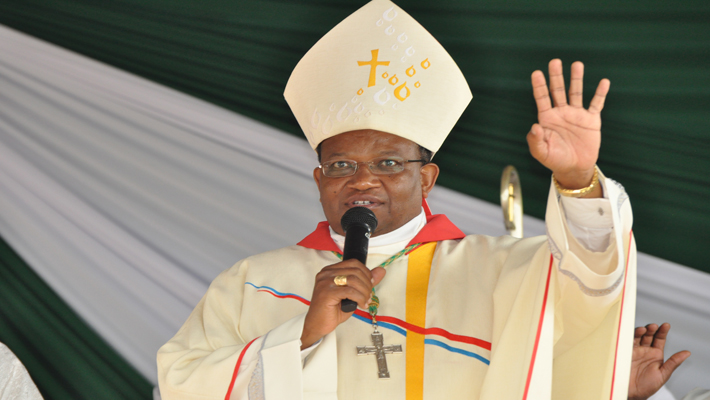 NAIROBI, MAY 27, 2022 (CISA) – Civil, religious and political leaders across all divides convened on May 26, at the Nairobi Safari Park Hotel for the 19th Annual National Prayer Meeting organized jointly by the Senate and National Assembly of Kenya.

Leader after leader prayed for peace ahead of the August general elections, which have seemingly roused anxiety across the country, as a result of its hotly contested nature. They then committed the nation to God and spread the message of love, especially during the political season.

Among the clergy present at the function, was the Archbishop of the Catholic Archdiocese of Nyeri, Most Rev Anthony Muheria who spoke about peace, love and forgiveness.

Peace, he said, “isn’t just a word. A good word. It is a costly commodity which is paid with an entire life. With all of you. With all of me because it costed all of Christ. We want to pay that price for peace.”

“Today, we are here to pray and we are pleading with God almost fearfully because just like the disciples in the Sea of Galilee we find ourselves facing a storm. Stormy weather. We see elections coming and it is a storm brewing. Our ship is being rocked by the waves, by the rising exchange of ungodly words and incitement. The ship of each one of us. My ship, your ship. The ship of the average Kenyan is being rocked by anxiety. Is being irritated by the character of our politics by our leadership. A leadership that claims to be, yes, people of God. People of faith. God-fearing but yet we are rocked. They rock our consciences. They put to test that basic teaching that we have just heard of all faiths. Love one another. The storm, the words, the vibes. They rock our godliness and belief in God and replace our God sense with nonsense,” said Archbishop Muheria.

The prelate also decried the state of affairs in the country pointing out that most political leaders were chained to fear of doing the right thing and choosing to do evil because good is unpopular.

Bishop Oginde of the Christ Is the Answer Ministries (CITAM)opined, “Preparations for elections look like preparations for war…” he continued, “Fellow Kenyans, we have had many prayer meetings in this nation but today I want to implore us to make a transition. A transition from merely making prayers to sincerely calling upon God. A transition from merely showing face value prayers to a deep reverence for God.”

He also maintained that it is possible to vote and receive results in peace and continue with our lives if only we shift our mindset and understand the purpose of elections.