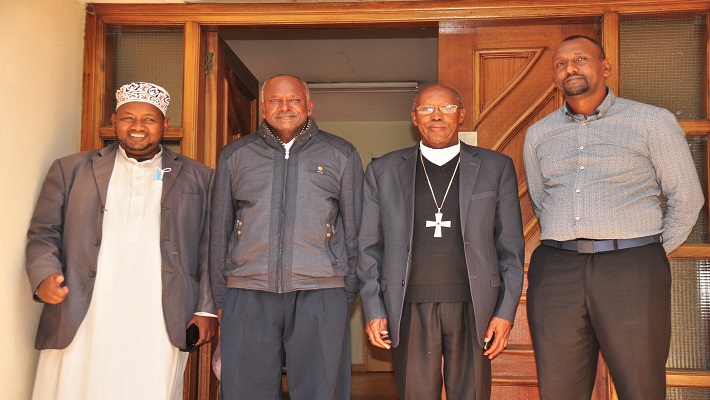 NAIROBI, JULY 23, 2021 (CISA)-Marsabit County Interfaith Council has asked elected leaders in the county to show goodwill in ending sporadic ethnic conflicts in the county by recognizing their shortfalls, commit and jointly lead the way towards to ending the clashes.

This follows a two-day meeting convened on Monday, July 19 and on Wednesday 21 by Dr Fred Matiangi the Cabinet Secretary of Interior and Coordination of National Government in Nairobi bringing together elected leaders, clerics and representatives of national government in the county to find a solution to persistent ethnic clashes in the region.

“Dialogue to solve the problem should be given a chance so that there can be understanding and reconciliation. Those who are affected to be patient we see how they can be reinstated or compensated. Meanwhile further dialogue with politicians should be given a chance, politicians to talk to people about peace to see whether they are walking the talk,” Bishop Peter Kihara of the Catholic diocese of Marsabit and Chairman of the Marsabit County Interfaith Council told CISA on July 22.

According to Bishop Kihara, the meeting was convoked following the escalation of ethnic conflict characterized by arsons, shooting and property vandalized. Media reports indicate that nine people have been killed in the recent clashes.

Since 2005, the council comprising religious leaders for different denominations in the county have been working together to spearhead peace process and reconciliation among warring communities in Marsabit.

“Dialogue has never been given a chance in a manner that it will build, heal and reconcile the people. The leaders never reached that point, instead they keep off. That is why they keep sending us. We don’t want to see our people in suffering,” Bishop Kihara lamented.

According to Sheik Mohamed Nur Kuk the Vice Chairperson for the Marsabit County Interfaith Council, politics has been the catalyst to fighting. He highlights uneven distribution of resources and administrative boarder issues to be the underlying issues affecting the nomadic communities; Rendile, Samburu, Gabra, Borana, Turkana and Dassanech living in the county.

“The people of Marsabit should sit together avoid playing part in dirty politics. Leaders should also avoid hate speech, that worsens the situations,” Sheik Mohamed said appealing to the communities to accept and sit down together to help find lasting peace in the region.