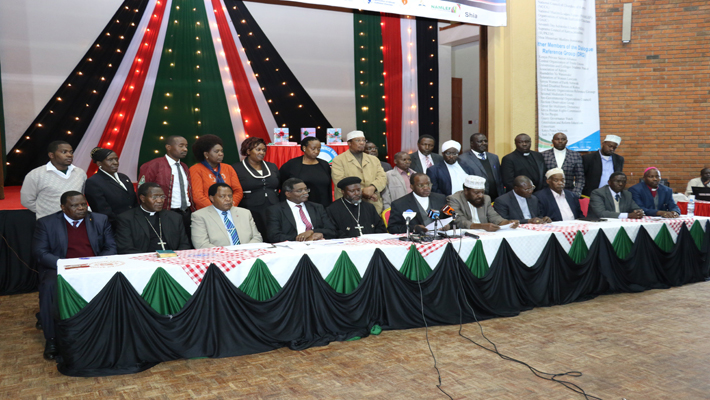 “…corruption is a cancer that has pervaded every sector of our society, and which the current laws have proved inadequate to address.  There is therefore an urgent need to take radical action to eradicate it and give the nation a new beginning.  It is in this regard that we urge His Excellency the President to declare corruption a national disaster to facilitate adoption of extra-ordinary measures to deal with it,” the group said in a press statement of Wednesday July 4 2018 at Ufungamano house Nairobi.

The statement was given during the launch of a National Dialogue Framework that the religious leaders hope will serve as a guide to a national dialogue process aimed at providing space for Kenyans to identify, discuss and resolve the underlying causes of division and bitterness in the country following the 2017 General Elections.

The Dialogue Reference group, that is led by its Chairman Archbishop Martin Kivuva of the Catholic Archdiocese of Mombasa, and its Vice Chairman, General Secretary of the National Council of Churches of Kenya, (NCCK) Rev Canon Peter Karanja recommended that a new law should be introduced to give amnesty to, “…past offenders who confess and give back to the state their loot, and provide very stiff penalties and prosecution of corrupt offenders.”

The National Dialogue Framework identified other national issues that the government needs to address. They include Promoting devolution, Acceleration of Service delivery, Security Sector reforms, Constitutional and legal reforms, Promotion of National cohesion, and the audit and closure of the 2017 General elections.

The Dialogue Reference Group invited all stake holders to participate in the first National Dialogue Conference scheduled for August 7-9, 2018 at the Bomas of Kenya.

The team also urged the National Assembly to reconsider and reduce the enhanced taxation proposed in the resent National Budget to avoid further impoverishing Kenyans, and recommended that state agencies responsible for quality standards checks on consumer goods who have allowed substandard and contaminated products be charged