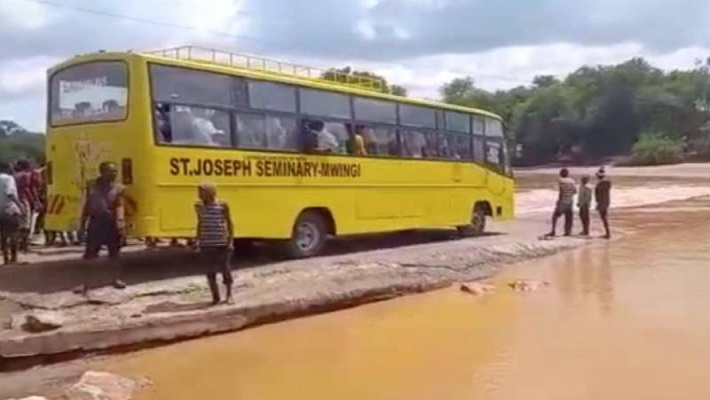 MWINGI, DECEMBER 7, 2021 (CISA)-The Catholic Diocese of Kitui will on Thursday, December 9 hold a joint requiem Mass for the 32 victims of the ill-fated bus that plunged into River Enziu on Sunday.

In his address after a successful rescue and recovery process, Bishop Joseph Mwongela of Kitui diocese announced that faithful will congregate at Mwingi Junior Seminary for prayers to condole with the affected families and pray for those who were rescued and in the hospital.

“It is a very difficult moment for us as a diocese and I thank those who have contributed and for the condolence messages. From the political leaders, religious men and women, bishops and Pope Francis through the nuncio that he is together with us and that he is praying for us. May we continue being in one communion,” he told the diocesan Radio, Thome FM.

“I urge all Christians in the diocese and across to join us in prayers, to pray the rosary for the survivors so as to avoid tragedies that follow in similar occurrences. Let us pray for the souls of the departed so that they may rest in peace,” said Bishop Mwongela.

The unfortunate incident happened when a school bus belonging to St Joseph Junior Seminary, which was ferrying choir members of the Good Shepherd Catholic Parish, Mwingi, headed towards Nuu for wedding ceremony slid off the bridge and plunged into a flooded river Enziu on December 5.

Among those who died are two religious Brothers of St Claver’s, Ken Wanzala Okinda an Educationist at St Gabriel Mwingi and Stephen Kang’ethe who was the driver of the bus.

“I ask our National Government to hurriedly construct the bridge at Enziu which continues to cause deaths. And also this applies the other bridges within the county and in parts of the country that risks the lives of the commuters,” he said.

Bishop Mwongela also cautioned drivers against taking risks on the roads they are not familiar with. “As we can see the Enziu Bridge is cut and when the driver got into the water, he couldn’t see, plunging the bus in the river. If he was regular on the road, he couldn’t have risked his life and others on board.”

Following the completion of the rescue and recovery process, families will have to wait for about two weeks for DNA results in identifying victims of the tragedy.

“We request the government to hasten the identification process of the bodies so as to enable the families to plan for funeral and burial. We shall walk together, support one another to ensure all those who perished get a decent send-off,” Bishop Mwongela said while appreciating members of the Kenya Army, National Youth Service, officers from the county government and well-wishers for aiding in the rescue process.