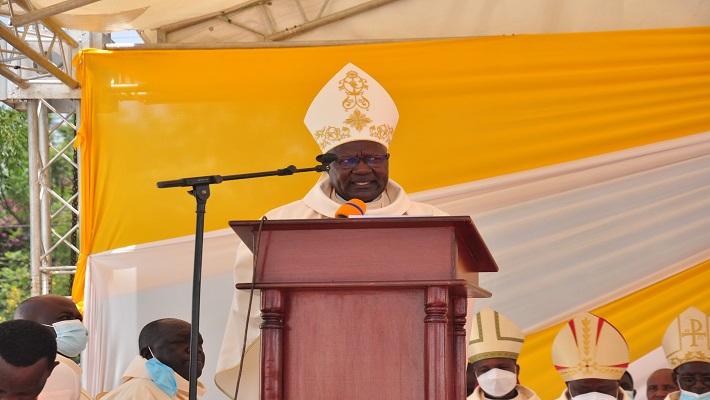 NGONG, MAY 17,  2022 (CISA) – Bishop John Oballa Owaa of the Catholic Diocese of Ngong and chairperson of the Commission for Promoting Integral Human Development at the Kenya Conference of Catholic Bishops (KCCB-CJPD), has appealed to Kenyans to maintain peace during and after the electioneering period.

“A lot of tension is usually generated in the build-up to the electioneering period. I exalt you fellow Kenyans to exercise your right and vote peacefully for ethical leaders and to maintain peace during the entire period,” the bishop appealed.

“Elections should safeguard and protect people’s lives not lead to their harm displacement or death. Elections come and go but Kenya remains. Therefore, let us foster and promote peaceful, free, fair and credible elections this year,” he urged.

The prelate urged the people to reflect on the past elections especially the post-election violence of 2007/2008, which he said is a clear experience and dangerous ” example of the impact of hate speech,” in the country.

“No Kenyan should lose their lives because of elections. Kenyans should reject and publicly call out politicians promoting or using hate speech for political millage.  We pray that the Lord God will cleanse our lips as he did those of the prophet Isiah who cried out ” For I am a man of unclean lips.”  What comes from our mouths should only carry messages of love and truth.” he said.

The bishop of Ngong pleaded with politicians seeking public offices to sell their ideas and visions “for a united Kenya and not remind Kenyans of their tribal affiliations,” while also warning public figures ” especially comedians who constantly make jokes about people belonging to certain tribes,” to desist from it during the electioneering period.

Bishop Oballa beseeched every individual to be reminded of the Kenyan family,” in the same family, you can easily find Muslims, and Christians belonging to different denominations but they never allow religion to separate them. The same should be extended to political affiliations and those who hold political views, there should be tolerance so that we all build a united Kenya and work towards peaceful elections.”

On 9th August 2022, Kenyans will head for the General Elections to elect the president, governors, senators, members of parliament, women representatives and members of county assemblies, in an election tutted to be a two horse race between Deputy President, William Samoei Ruto and former Prime Minister, Raila Amollo Odinga.