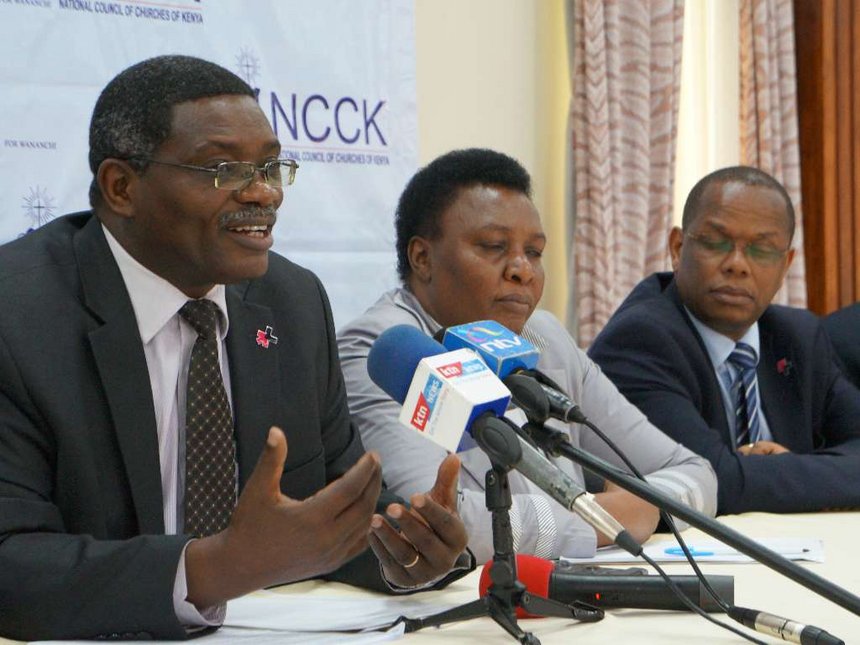 LIMURU FEBRUARY 13, 2018 (CISA) – The National Council of Churches of Kenya (NCCK) has called for meaningful dialogue aimed at achieving national cohesion and peace.

“As a way of resolving the sharp divisions that have emerged in our nation, it is important that we promote intra and inter-ethnic dialogue aimed at promoting cohesion and peaceful coexistence,” NCCK General Secretary Rev Canon Peter Karanja said in a press briefing.

Canon Karanja was speaking February 8 in Limuru at the conclusion of a two-day extra ordinary meeting aimed at reviewing the state of the nation and propose the necessary interventions.

“Kenya is in a crisis. We are deeply concerned that many of us are unwilling to accept this fact. Even worse is that those in the leadership of the major political formations, as they compete for power, are pulling the country apart rather than bringing it together,” stated Canon Karanja.

He noted that the 2017 presidential elections have not been brought to a closure, and instead have left the nation with two centers of power that are in a superiority and popularity contest, and further the strain that the long electioneering period has exerted on the people and livelihoods has resulted to a worsening economy, yet there is no let up by the political actors.

NCCK decried the blatant disregard of the rule of law by both the government and the opposition, the climax of which was the shutdown of four Television Stations that denied Kenyans access to information.

“These recent developments have sparked a fear in Kenyans that they are witnessing a return to autocratic governance characterized by repression of fundamental human rights, manipulation of the media, and suppression of free speech,” said Canon Karanja.

NCCK further called for consultations among all stakeholders to agree how closure of the 2017 elections can be found so that the country doesn’t go to the 2022 elections under the same conditions.

NCCK further proposed a short term review of Governance structure in order to expand the executive and dignify the opposition as well as an audit of the Constitution to ensure that the relational frameworks defined within it are functional in the lives of the people.

“It is important that Parliament enacts a law that will facilitate an inclusive and people-driven audit of the Constitution of Kenya 2010 aimed at identifying gaps and any provisions that require amendment so as to better define the nation,” stated Canon Karanja.