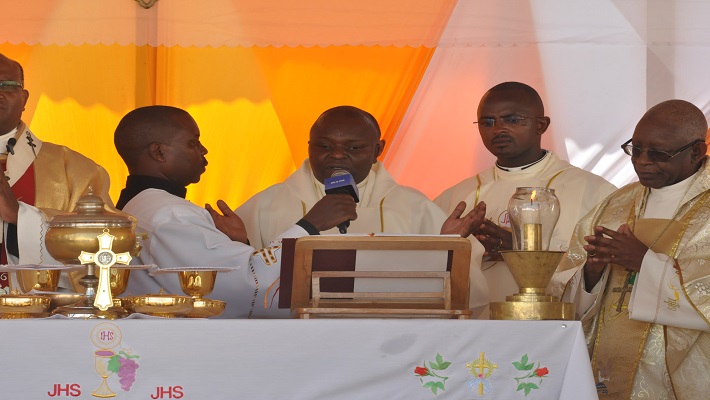 NYERI, JANUARY 16, 2023 (CISA)- History has been made as the Catholic Church in Kenya witnessed the extraordinary ordination of the first blind priest, Fr Michael Mithamo King’ori, of the Catholic Archdiocese of Nyeri on January 14, 2023, at Kiamuiru Catholic Parish, St. John Bosco Kiamuiru Primary School Grounds.

The priestly ordination was presided over by Most Rev Anthony Muheria of the Catholic Archdiocese of Nyeri and concelebrated by Most Rev Peter Kairu, emeritus of Nyeri. The auspicious celebration served as a moment of pure grace and testament of God’s everlasting love as proclaimed by Fr Mithamo who had to wait two years to be ordained a priest of the Catholic Church. “Back in the year 2019 around November. That is when I lost my sight, which wasn’t easy of course. Yes, it wasn’t easy, but again, I had to question myself on what other I have, rather than focusing on the loss of sight. I questioned myself a lot about what I had that I could be able to use to ensure that I still continue with my life, and of course as a Catholic deacon then and as a future priest. I had many questions why me? But then again I had no answers, nobody could come and explain to me the why. That is when I realized that I just had to hang where God is because he has the best answer,” recalls Fr Mithamo in an interview with CISA. Fr Mithamo who hails from Mweiga Catholic Parish in the archdiocese of Nyeri was not born with blindness. As a young boy, he studied at Mweiga Primary School and Ruthagati Secondary School before joining Christ the King Major Seminary in Nyeri for his priestly formation.

His unfortunate battle with sight impairment came after he was ordained a deacon on June 22, 2019. For three months, he nursed his illness and was at one point admitted to the Mater Misericordiae Hospital where the doctors revealed to him that his sickness had also affected his eyesight.

“I was already ordained a deacon by my bishop, Archbishop Anthony Muheria. What I remember is that I took this blindness as things have come to end, but my bishop was the first person to come and encourage me where I was sick at Mater hospital,” he tells CISA.

“I remember his words correctly, He told me, my son and deacon, not to worry. Don’t even think of whether you are going to be ordained or you’re not going to be ordained. I am the one who ordains, what I want of you now is to feel that you have seen the church and you have a father who is ready to take care of you, a father who is ready to journey with you. And he has been true to his word to date,” beams the newly ordained Fr Mithamo. Archbishop Muheria, who against all odds has journeyed with Fr Mithamo since his ordeal, is full of praise and admiration for the young priest who he says is an icon of courage for the faithful.

“What we’ve discovered with the journey of Fr Michael has been the different channels God can use, even in touching people. He has changed very many people just as a deacon and just by his determination and resolve by embracing disability and the difficulty he received. His name is an icon in some way of courage, even under fire and adversity. And I think this is something that we need to learn,” Archbishop Muheria accentuates in an exclusive interview with CISA.

“Today was a great opportunity where we celebrate also the fact that disability does not in any way itself hinder one from the service of God. In fact, it might be a catapult in a springboard for doing things we wouldn’t otherwise have not been able to do,” he adds.

Aware of the limitations of the code of canon law (can. 1029 and 1041) that spells out the requirements of those to be ordained, Archbishop Muheria believes that the impact of Fr Mithamo’s ordination is to create a discussion around vocations of those who are differently able. “I think it’s a new terrain. That’s what we are doing. We are challenging, we are moving the church into a new fringe or a new frontier. But that means still you have to be prudent. It’s not just a careless, reckless action. We have to do it, having studied and having the people, adequate people to accompany them. Otherwise, they will not perform the ministry, otherwise, they will be a hindrance and not a service. So, it is important that you have a deliberate environment and parameters so that you can nurture such a vocation. It is not just to allow someone with a disability, it’s to make sure that he’s able to blossom within the parameters and people to accompany him in order to live that ministry,” posits the archbishop. The local ordinary of Nyeri who was also celebrating 19 years of episcopacy, is convinced that after months of witnessing the tenacity and sheer determination of Fr Mithamo, he is “able to perform his capacity as a priest despite his sight impairment.”

Fr Mithamo who is currently enrolled at the Kenya Institute for the Blind and has been missioned to Kigumo Catholic Parish, encourages those who are differently able to focus on their other strengths and not be weighed down by their incapabilities.

“Having been ordained a priest, I think this is the best answer that God had for me. I could say that I have no regrets. I’m happy and I’m here encouraging those people who could be having various disabilities in their lives to focus on the strengths they have because besides the disability they could consider as negative, their other strengths could be positive. So, we don’t have to regret, we don’t have to question ourselves. We don’t have to complain. We already have enough as we are,” Fr Mithamo inspires.