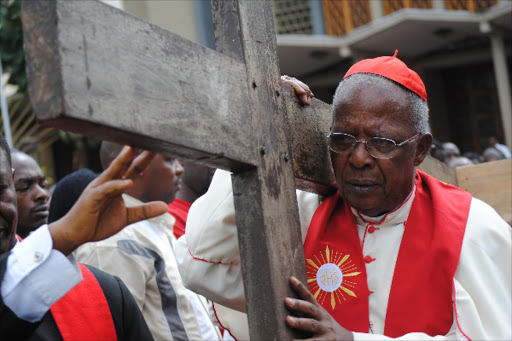 NAIROBI, MARCH 27, 2020 (CISA)-Priests in the Archdiocese of Nairobi will mark Easter Triduum celebrations in private following the banning of gatherings across the country to curb the spread of coronavirus.

This is according to a statement released March 26 signed by John Cardinal Njue the archbishop of Nairobi.

Cardinal Njue also advised that scheduled celebrations of weddings and funerals during this period of pandemic follow guidelines stipulated by the government.

“…even if it is not possible to have the presence and active participation of the faithful, which brings out more plainly the ecclesial nature of the celebration, the Eucharistic celebrations always retains its efficacy and dignity because it is the action of Christ and the church, in which the priest fulfils his own principal office and always acts for the people’s salvation,” he quoted the General Instruction of the Roman Missal.

Since the sacrament of confession cannot be denied to anyone who asks for it, Cardinal Njue called for adherence to the guidelines by the Apostolic Penitentiary on the sacrament of reconciliation during the pandemic.

On televised or radio Masses, “we recommend we use the guidelines given from Vatican that we can transmit live (not recorded) televised or internet broadcasts.”

“I decree that the Religious Sisters; brothers and lay Christians residing in the Archdiocese of Nairobi be dispensed from the obligation to attend Mass on Sundays; Easter Triduum and other Holy Days of Obligation,” reads a separate statement signed by Cardinal Njue.

He said the dispensation remains in effect until it is revoked, to help maintain physical distancing in controlling the spread of Covid19.