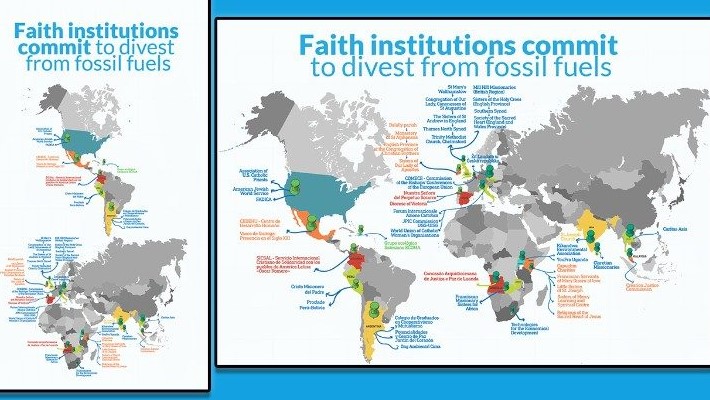 “Today’s commitment to fossil fuel divestment is the first that has been made after the Vatican’s first-ever operational guidance on the environment was issued. These guidelines, which were jointly issued by all dicasteries of the Vatican, suggested that Catholics avoid investing in companies that “harm human or social ecology (for example, through abortion or the arms trade), or environmental ecology (for example, through the use of fossil fuels),”reads a November 16 press release by the Global Catholic Climate Movement.

The Congregations including Capuchin Charities, Franciscan Servants of Mary Queen of Love, Little Sisters of St. Joseph, Sisters of Mercy Learning and Spiritual Centre and Religious of the Sacred Heart of Jesus, are among 47 institutions that announced their divestment November 2020.

“We celebrate that Catholic institutions around the world are implementing the Vatican’s guidelines on divestment from fossil fuels. Today’s announcement demonstrates that people of faith have both the wisdom and the courage to act,” Fr Augusto Zampini-Davies, adjunct secretary of the Vatican’s social-environmental ministry, the Dicastery for Promoting Integral Human Development said.

Fr Augusto says “the future of our economy is in clean energy, and the Catholic commitment is clear. We invite governments to join us in urgent, ambitious action to protect our common home.”

To date, a total of nearly 400 faith institutions globally have divested from fossil fuels.