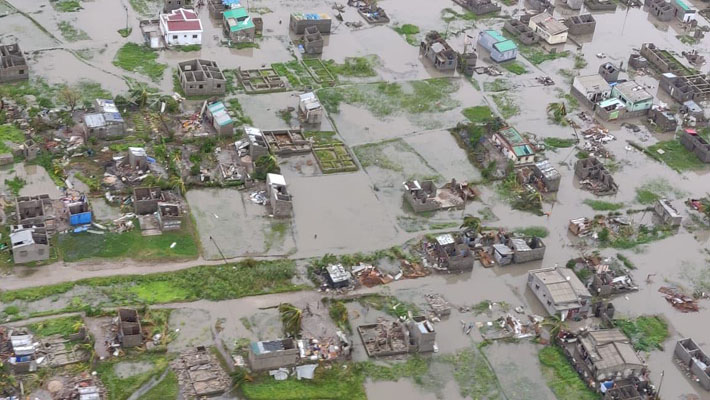 BEIRA, MARCH 19, 2019 (CISA) -Close to 100 people have been confirmed dead, scores injured, and others unaccounted for in the aftermath of cyclone Idai that hit the Mozambican city of Beira, and parts of Zimbabwe.

A statement issued by the International Federation of Red Cross and Red Crescent Societies, described the situation as, “Terrible with huge destruction.”

“Almost everything is destroyed. Communication lines have been completely cut and roads have been destroyed. Some affected communities are not accessible,” said Jamie LeSueur, the leader of the assessment team in Beira.

According to the statement, ninety percent of the city which has an approximate population of 530,000 people, has been damaged.

President Filipe Nyusi of Mozambique declared the cyclone is a humanitarian disaster, which has exposed more than 100,000 people to danger.

“For the moment we have registered 84 deaths officially, but when we flew over the area… this morning to understand what’s going on, everything indicates that we could register more than 1,000 deaths,” President Nyusi said in an address to the nation.

After hitting Mozambique, cyclone Idai continued west to Zimbabwe as a tropical Storm causing destruction in several districts in the eastern part of the country with Chimanimani and Chipinge districts the most affected.

The government of Zimbabwe termed it a state of disaster in a statement signed by Vice President Constantino Chiwenga  noting that the government is working round the clock to manage this unfolding disaster.

Zimbabwean President Emmerson Mnagangwa has since cut short a trip to the United Arab Emirates to get involved in the national response.

“Rescue operations are underway and  we are grateful for the bravery of the men and women of the Zimbabwean armed forces who, along with our local & international partners, are participating in the urgent rescue efforts,” he said in a tweet.