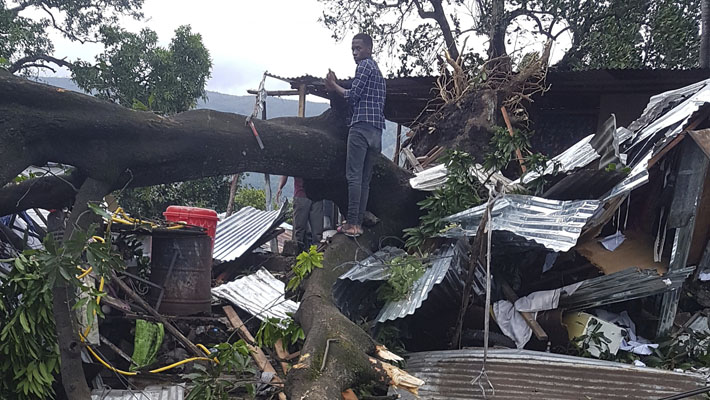 PEMBA, APRIL 30, 2019 (CISA)-38 people have been confirmed dead, and about 35,000 homes destroyed in Cado Delgado province, in the northern part of Mozambique, according to the Mozambique’s National Institute of Disaster Management.

This is in the aftermath of Cyclone Kenneth which made landfall on Thursday, April 25 at the speed 220 kilometers per hour.  The UN Office for the Coordination of Humanitarian Affairs (OCHA) described it as the strongest cyclone to ever strike Africa, and predicted further heavy rain over the coming days.

“Cyclone Kenneth made landfall at the end of the rainy season, when river levels were already high, increasing the risk of river flooding,” said Saviano Abreu, the spokesperson of the OCHA regional office for Southern and Eastern Africa.

“Humanitarian needs in Mozambique have sky-rocketed, and the humanitarian response will need to rapidly scale-up,” Saviano said.

Cyclone Kenneth is the second tropical storm to have hit Mozambique weeks after Cyclone Idai struck the Mozambican city of Beira.

Before smashing into Mozambique, the cyclone hit the Comoros islands, killing at least three people and damaging 75,000 homes.

The United Nations pledged to grant Mozambique and the Comoros Islands Sh1.3 billion ($13 million) in emergency funds to help provide food and water and repair damage to infrastructure.

“This new allocation of Central Emergency Response Fund funds will help humanitarian partners to scale up the response to address the needs of those most vulnerable in the aftermath of Cyclone Kenneth,” said UN Humanitarian Chief, Mark Lowcock in a statement.