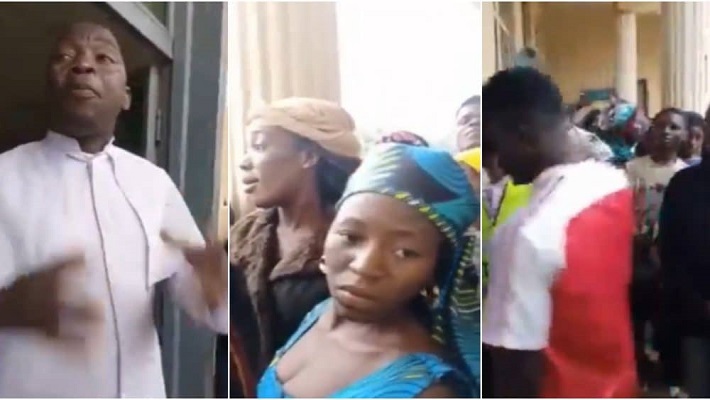 PANKSHIN, JUNE 14, 2022 (CISA) – A Priest in the Catholic Diocese of Pankshin, Nigeria, has caused a wide uproar within the local Catholic Church when he denied entrance to a group of faithful who do not have their permanent voter’s cards commonly referred to as PVC in the country from attending Mass.

Rev Fr Kefas Gogwim, in a video doing rounds on social media and shared by one of the parishioners, is seen at the entrance of the Church saying “So we want Christians to take their responsibilities and roles seriously, so today am serious about it, as am standing here, if you have your PVC begin to come in and if you don’t have your PVC find your way back home, you will not attend Mass here today.”

The curious congregants who had thronged the Church for the service could be seen heeding the call of the priest, with those who had their PVCs displaying them as they entered the Church while the rest replied in unison “Yes Sir,” signaling that they agreed with the directives of Fr Gogwim.

Fr Gogwim explained the intention of his guidelines is since the Christian population in Nigeria is huge but when it comes to elections few of them participate and exercise their democratic right leading to poor representation on the national stage.

“If you do not have your PVC, you cannot receive communion but here, we know not everyone is a communicant, so what we will do is from today if you are coming for Mass carry your PVC, if you do not have your PVC don’t bother coming because there is no point in having Christians fill the Church but during elections, we have only a handful of them going out to vote.  This means our numbers, our population, means nothing,” he explained.

Reacting to his controversial stance, a section of Nigerian online users took to social media to comment on the videos.

“The priest is right, it is a wake-up call for all Christians, we sit down and complain it’s Muslims in position and yet we are not voting the Christians to represent us on the political offices!” commented  Moses Faga Amvc Cln.

“The Priest is right…We have suffered in this country a lot. Is through voting that we shall all get out of this mess. Nigeria is our country and only us can take our country back. As a good citizen, is our duty to vote and get out of this Auctioned land kidnappers Den, bandits Haven etc. If we all vote a candidate base on Values, I believe God will help us…….” said Vincent Hemen Gaavlumun agreeing with the controversial move.

“To me it’s wrong telling people who took their time and courage to attend the Holy Mass despite the present situation of fears around the world. He was supposed to encourage them to get their PVC during the Mass and not to send them home after all does our vote really count in these present days, in short what will be doing is seeking God’s mercy and divine will,” disagreed Nwokocha Oliviamary.

However, with the move by Fr Gogwim being received with mixed reactions, the Catholic Diocese of Pankshin in a statement dated June 13 by the Director of Communications, Rev Fr Andrew Danjuma Dewan, has distanced itself from the act saying it was not a policy of the diocese.

“The action of this priest did not have the approval of the bishop nor is it the policy of the diocese. Hence, the Diocese disassociates itself from this video in circulation and regrets the unfortunate incident, much as parishioners are encouraged to obtain their PVCs to exercise their civic duties, “read the statement in part.

According to the Pew research centre, Nigeria has the sixth-largest Christian population in the world at about 87 million and also has the world’s fifth-largest Muslim population at about 90 million.

Nigeria is expected to hold their General Elections from February 25 to March 11, 2023.