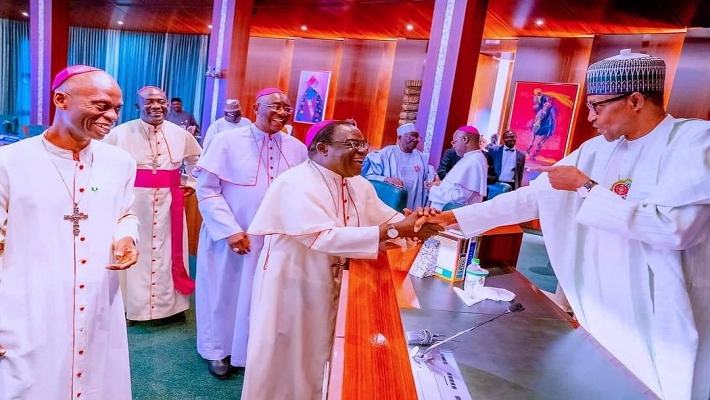 ABUJA, JANUARY 13, 2023 (CISA)– Nigerian President Muhammadu Buhari in an audience with the Catholic bishops at the presidential villa in Abuja on January 11, has pledged to address the recurrent insecurity and violent attacks meted on Christians through rebuilding infrastructure and re-orientation on education in areas affected by terrorist attacks.

“The question of insecurity is most important to us because unless a country or institution is at peace, it will be difficult to manage. I just came back from Adamawa and Yobe states. During the visit to both states, I listened carefully to what the people and officials had to say. And they all said the situation had improved since 2015, especially in Borno. Boko Haram was just fraudulent and a plot to destroy Nigeria. You can’t say people should not learn; the people need to grow intellectually,” said President Buhari.

The president was responding to an eight-paragraph message delivered by the bishops at a meeting at his residence, who highlighted the killing of more than 40 people during a Mass last year.

The prelates underscored “The sad state of insecurity in the land…has consumed thousands of innocent Nigerians across all regions, creeds and ethnic groups.”

The delegation led by Most Rev Lucius Ugorji, the president of the Catholic Bishops’ Conference of Nigeria (CBCN) asked President Buhari to use his remaining months in office to tackle insecurity, improve the economy, and ensure credible elections.

“We commend and congratulate you for the efforts the government has put into ensuring real improvement in our electoral system and processes, especially your signing into law the electoral bill. Please, do not relent in making sure that INEC and other relevant agencies of government carry out their serious duties to conduct peaceful, free, fair, and credible elections,” said the bishops s ahead of the February 25 General Elections.

Commenting on the economy and in line with the predictions by the World Bank on the slow economic growth of the country in 2023, the bishops said the economy “has been put under serious stress by both internal and external negative forces, which has had a serious adverse effect on the lives and livelihood of the average Nigerian.”

In response, the president said foreign debt is a sign of creditor confidence in Nigeria’s future. Looking at the economy, he believes Nigeria is trying to rely on itself especially agriculture for livelihood and that the government continues encouraging more people to diversify.