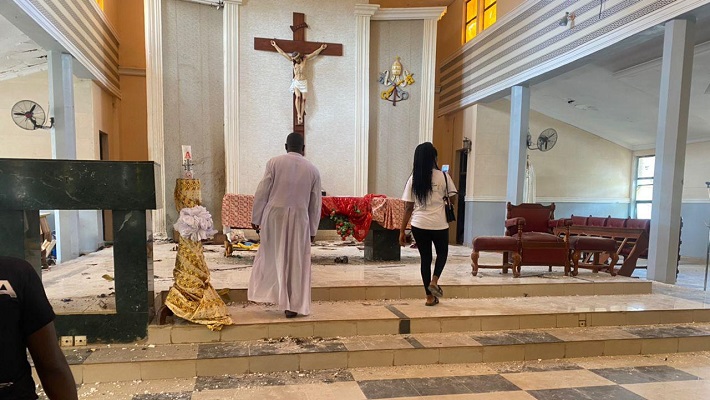 OWO, JUNE 10, 2022 (CISA)-The Minister of the Federal Ministry of Interior of Nigeria Rauf Aregbesola has linked the Islamic State in West Africa (Iswap) group to the Sunday June 5 attack at the Catholic parish of St Francis in the town of Owo which left at least 40 dead and around 60 injured.

Speaking to the press on Thursday June 9 alongside Inspector-General of Police, Alkali Baba Usman at the end of National Security Council Meeting presided over by President Muhammadu Buhari the minister confirmed having been able to locate leads to the perpetrators of “this tragic and heinous attack”.

“The Council is quite concerned about the violent attack in Owo, Ondo State. We have been able to locate the imprints of the perpetrators of that attack and form all indications, we are zeroing in on the Islamic State of West African Province (ISWAP).”

“It is not an ethno-religious thing. The ISWAP members wanting attention and recognition are suspected to have carried out that attack and we have directed all the agencies concerned to go after them and bring them to justice,” he said asking the police to speed up arrests.

Bishop David J. Malloy of Rockford, chairman of the U.S. Conference of Catholic Bishops’ Committee on International Justice and Peace sent a letter of solidarity to the president of the Catholic Bishops’ Conference of Nigeria where he reiterated his solidarity with the Church in Nigeria amidst the unabated violence besetting Nigerians and the Church particularly. He also stated his hope that those responsible for these acts are brought to swift justice.

“Nigeria has sadly become all too familiar with such growing violence. In addition to the horrible loss of life, this attack is a disturbing development as it occurred in the far south of Nigeria where such bloodshed heretofore has been largely unknown. Just three weeks earlier, a young Christian student was accused by fellow students of blasphemy and brutally murdered. When police arrested two suspects, riots broke out directed at several Church buildings.

“The U.S. bishops’ Committee on International Justice and Peace has supported the Church in Nigeria for many years in its effort to stop terrorist attacks by Boko Haram and armed groups, to build peace between herders and farmers, and to ensure credible and transparent elections. Bishops on our committee have visited Nigeria and have received their Church leaders in Washington. We join our Holy Father, Pope Francis in commending the souls of the dead to the loving mercy of God and imploring ‘divine healing and consolation’ upon those who are grieving. The committee remains prayerfully determined as ever to support our brothers and sisters of the Church in Nigeria.”