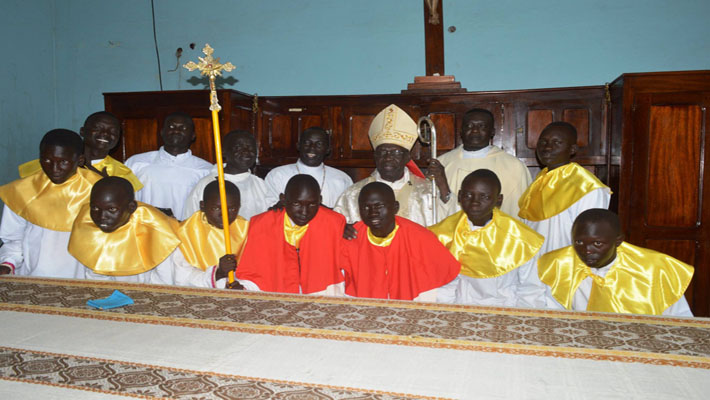 JUBA, APRIL 23, 2019 (CISA) – Archbishop Paulino Lukudu of the Catholic Archdiocese of Juba has expressed joy over the peace that prevailed in the country during the Easter season.

He was speaking on April 21 at St. Theresa’s Cathedral in Juba, where he   said that he was overjoyed, at the image of peace that was depicted by the people.

“When I saw this, I wept. I was weeping for joy, because of this image.  People shouting, but not fighting,” he said.

He further encouraged the congregation, to rejoice over the resurrection of Jesus Christ, the sacrifice of Easter, saying that he has defeated all sin and evil.

“If we believe in the resurrection of Christ, this war, this fighting has been defeated, it has been conquered. This evil that is still among us, Jesus Christ by dying and rising, has conquered and finished it all. Malice, the life of evil, the life of war, the life of hatred, the life of sin, this life is defeated,” he said.

The Archbishop also called on the people of South Sudan to live a vibrant life, and continue to search for peace.

“Be strong, don’t live like defeated people. Whatever problems we have, yes we feel them and we suffer because we are human. But don’t fear. Jesus Christ by his resurrection has opened the way for the peace we are looking for, and therefore let us find out this key that opens us to peace, the way to being happy, the way to love…let us love one another,” he said.

President Salva Kiir and Deputy President designate Riek Machar earlier in April, visited Vatican where they met Pope Francis, who pleaded with them to live in peace.