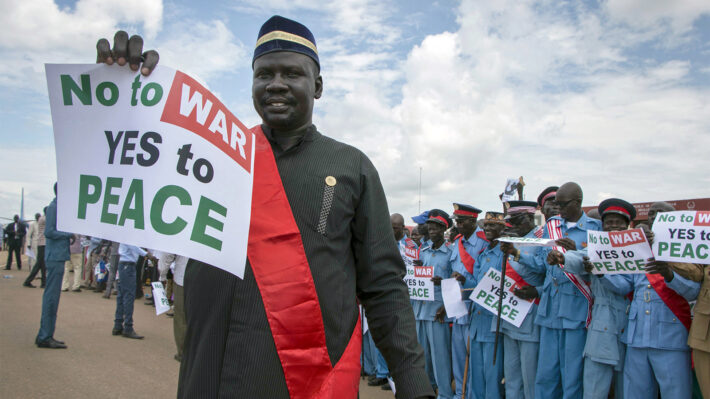 JUBA, MARCH 5, 2019 (CISA)-The Catholic bishops of South Sudan have called on the government of South Sudan to actively engage all opposing parties in the Revitalized Agreement on the Resolution of Conflict in South Sudan (R-ARCSS) to ensure its durability.

Speaking in a statement after the February 26-28 meeting in Juba, the bishops noted that for the peace deal to last, all warring parties need to sign it willingly and without hidden intentions.

“While many ordinary people long for peace, there is no will or commitment for peace amongst many of our leaders, hate speech and propaganda abound, and there is a thirst for revenge amongst many of our communities…The President of South Sudan, as our national leader, should constructively engage all stakeholders and Parties to the R-ARCSS to ensure that each party fulfils what it agreed to do in signing the revitalised agreement,” they said.

The bishops also called for dialogue and inclusion of all the community leaders of South Sudan, emphasizing that they will play an important role in conflict resolution.

“The value of traditional leaders and chiefs must be recognised and factored in to the implementation process through various confidence-building mechanisms… Traditional South Sudanese conflict resolution mechanisms and inter-tribal dialogue practices should be used to deepen understanding and contribute to the full implementation of the Agreement,” they noted.

They further recommended that Academia, researchers, church personnel and other experienced practitioners should be involved to provide recommendations and examples of best practice.

They called on parties that will be involved in the peace process to, “Show the determination and necessary political will to act against spoilers from within their own ranks,” recommending that,

“The Parties should ensure that all the remaining political detainees and prisoners of war are released, and those with criminal cases are given transparent and timely due process. Any who have “disappeared” while in detention must be traced and accounted for.”

For confidence building purposes, they recommended that an  official lifting of the State of Emergency, “…to ensure that the political space needed for exercising the individual’s democratic rights and freedom of speech and freedom of assembly are in place, and the role of a responsible media is duly recognised.”

The bishops expressed the Church’s commitment to playing an active role in ensuring a firm peace agreement.

“The Catholic Church will act to prepare parties to the R-ARCSS, and reach out to non-signatory parties, for genuine and open dialogue in impartial forums so as: to initiate an acceptable platform for dialogue and deliberations; establish the obstacles to the peace process; identify gaps and difference among stakeholders; mobilise the stakeholders into a genuine negotiation table; build trust between the parties; identify and engage a team of respected peace mediators who will reach out to the parties and develop a strategy of addressing the listed concerns, and who must be non-partisan, ethical and respected, and have past experience in mediation and conflict resolution and have knowledge of South Sudan political affairs,” they said.