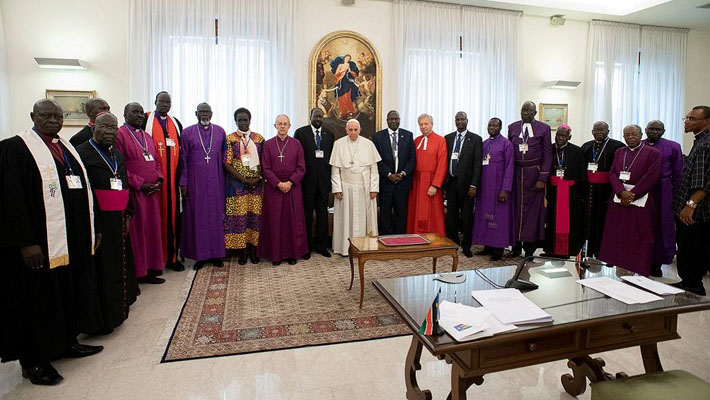 VATICAN CITY, APRIL 12, 2019 (CISA) –Pope Francis has implored the political leaders of South Sudan, to cease the civil war, saying that it is possible for them to keep the peace as indicated when they signed the September 2018 revitalized peace deal.

“To the three of you who signed the Peace Agreement, I ask you, as a brother, remain in peace. I ask you from the heart. Let us move forward. There will be many problems, but don’t be afraid, go forward, resolve the problems,” he said.

“I shall never tire of repeating, that peace is possible. Peace is a great gift of God but it is also a supreme duty on the part of those with responsibility for the people…all of us are called to be peacemakers, to build peace through dialogue, negotiation and forgiveness… people are exhausted by conflicts, remember that with war, all is lost,” he added.

The Pope was speaking April 11, at the Casa Santa Marta, during the two–day retreat to which he invited the opposing leaders of South Sudan, alongside some delegates from the political class that included President, Salva Kiir, Vice President designates Riek Machar and Rebecca De Mabior.

The Pope applauded the leaders move to sign the 2018 peace agreement, congratulating them for having, “Chosen the path of dialogue, for their readiness to compromise and for their determination to achieve peace.”

“You have started a process; may it end well. Although struggles will arise, these should stay within the office,” he said.

He further urged them to always present a united front to the citizens of South Sudan, so that they also may be united.

“Before the people, keep your hands united, from simple citizens, you will become fathers of the nation,” he told them.

The Pope, went on his knees and kissed the feet of the South Sudanese leaders as a gesture of humility and plea for peace and expressed optimism for lasting peace in South Sudan.

“I express my heartfelt hope that hostilities will finally cease, that the armistice will be respected, that political and ethnic divisions will be surmounted, and that there will be a lasting peace for the common good of all those citizens who dream of beginning to build the nation. Peace is the first gift that the Lord brought us and the first commitment that leaders of nations must pursue.  Peace is the fundamental condition for ensuring the rights of each individual and the integral development of an entire people,” he emphasized.

The Pope termed the two-day retreat with the leaders as a spiritual retreat…marked by interior recollection, trusting prayer, deep reflection and encounters of reconciliation with the purpose of Standing together before God and discerning his will.

He reminded the civil and ecclesiastical authorities present of their, enormous shared responsibility for the present and future of the people of South Sudan, and of how God will ask leaders to render an account not only of their own lives, but the lives of others as well.

The Pope expressed his spiritual closeness to refugees and the sick, all those who have lost their loved ones and their homes, to families that were separated and never reunited, all the children and the elderly, the women and men who have suffered terribly “…on account of the conflicts and violence that have spawned so much death, hunger, hurt and tears”.

“I think constantly of these suffering souls, and I pray that the fires of war will finally die down, so that they can return to their homes and live in serenity,” he said.

Pope Francis confirmed his hope and desire to visit South Sudan, together with the Archbishop of Canterbury, and the former Moderator of the General Assembly of the Church of Scotland.