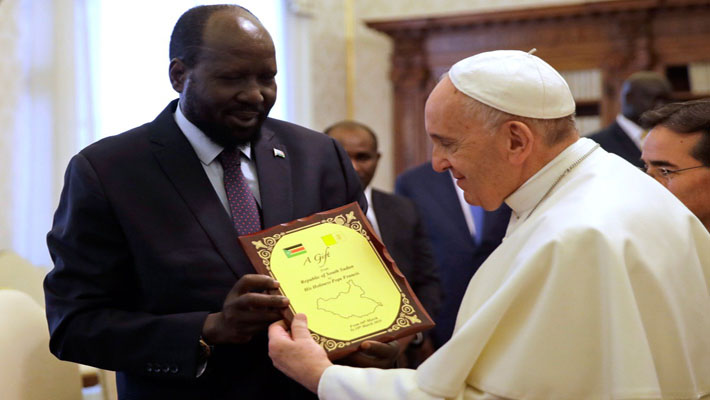 VATICAN CITY, MARCH 19, 2019 (CISA) – Pope Francis has renewed plans to visit South Sudan, after his trip of 2017 was postponed because of the civil war in the country.

During the March 16 meeting President Salva Kiir at the Vatican, Pope Francis, “Expressed the wish to ascertain the conditions for a possible visit to South Sudan,” a statement released by Vatican said.

The statement released by Vatican said that Pope Francis wanted to make the trip as, “A sign of closeness to the population and of encouragement for the peace process.”

They also discussed, “Questions regarding the implementation of the agreement reached recently by the various political actors with a view to a definitive solution of the conflicts, the return of refugees and displaced persons as well as the development of the country,” said the Vatican statement. Pope Francis and President Kiir also spoke of “the Catholic Church’s contribution to education and health and the process of reconciliation and reconstruction of the nation.”

South Sudan, which became independent in 2011, descended into civil war in December 2013 when a dispute between President Kiir and his deputy Riek Machar sparked fresh fighting. The conflict sparked Africa’s worst refugee crisis since the 1994 Rwandan genocide and plunged parts of the country into famine.

In September 2018, Kiir and Machar, signed a peace deal calling on the two main rival factions to assemble, screen and train their respective forces, and unify them into a national army before the formation of a unity government.

Pope Francis is expected to visit several African countries this year, including Madagascar.