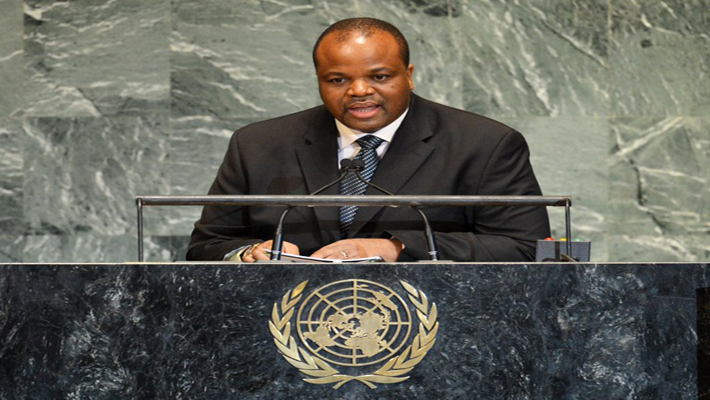 NEWYORK, SEPTEMBER 28, 2018 (CISA)- King Mswati III of Swaziland has called on the United Nations to involve African nations in global dialogues and engagements that affect peace and security in the world.

“Africa calls for the allocation of not less than two permanent seats, with all the prerogatives and privileges of permanent membership – including the right of veto; and five non-permanent seats, in the United Nations Security Council,” he said in his  address.

Speaking on development in Africa, he said that with strong national leadership and international cooperation, achieving the Sustainable Development Goals (SDG’S) ensuring social welfare, gender equality, and tackling many other issues in Africa is within reach.

“We remain confident that the Goals and Agenda 2063 of the African Union will continue to give us the proper guidance and impetus necessary to eradicate poverty and create inclusive and sustainable development for all,” he said.

King Mswati III Mswati appreciated the UN for its support for Africa, but also urged the Assembly to not leave Africa behind, noting that, “…her voice must be heard.”

The UNGA 73 President, Maria Fernanda Espinosa Garces, in her opening statement outlined seven priority themes for the session, including: To promote gender equality; promote and implement new global compacts on migration and refugees; highlight innovative thinking around the future of work; effort to protect the environment, particularly plastics pollution; raise awareness on persons with disabilities; implement the reform of the UN system; and promote peace.

UNGA 73 opened on September 18 and is scheduled to end September 28 under the theme “Making the United Nations Relevant to All People: Global Leadership and Shared Responsibilities for Peaceful, Equitable and Sustainable Societies.”

Previously known as Swaziland, the Kingdom in 2018 celebrated 50 years of Independence during which time the nation decided to change its name to Eswatini.