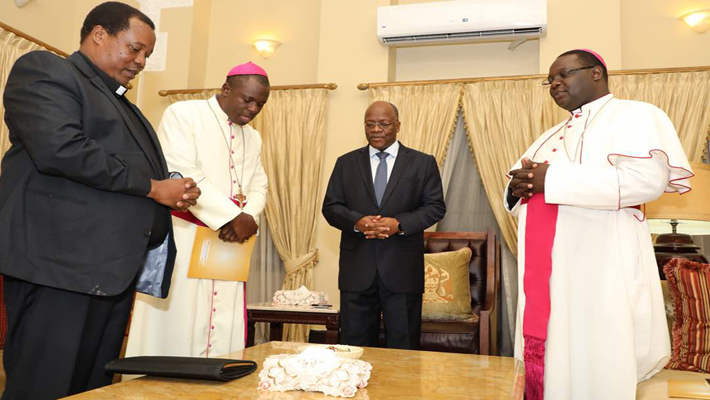 DAR Es SALAAM, AUGUST 14, 2018 (CISA)-Tanzania Episcopal Conference (TEC) has presented a suggestion to the Government of Tanzania to create a platform for dialogue on policies surrounding the provision of social services.

“Before the government makes any decisions that may have a bearing on the social services that the church provides, it is important to have a platform for discussion and a culture of debate, so as to assess the challenges and success of some policies and strategies,” said Archbishop Kassalla on the behalf of TEC.

Their proposal was presented during President John Pombe Magufuli’s meeting with Tanzanian Christian Community (TCC) at Statehouse in Dar es Salaam on August 7.

Other leaders present at the meeting were the Chairman of TCC Archbishop Anikilisa Cheyo and Chairman of TEC Bishop Bishop Gervas Nyaisonga.

In their meeting, the bishops assured the President of their commitment in building a good relationship between the government and the Church.

President Magufuli on his part urged the bishops to build and maintain a culture of meeting and discussing issues in truth and transparency.

“It is not easy to lead people. To bring forth a successful nation, needs the Tanzanians’ prayers, so that I may always put God first in my life and in my decisions,” he said.

The President further pledged continued collaboration with churches in the provision and improvement of social services by providing subsidies in line with the Public Private Partnership (PPP), the Central Relationship Agreement for Public, and Private Institutions.