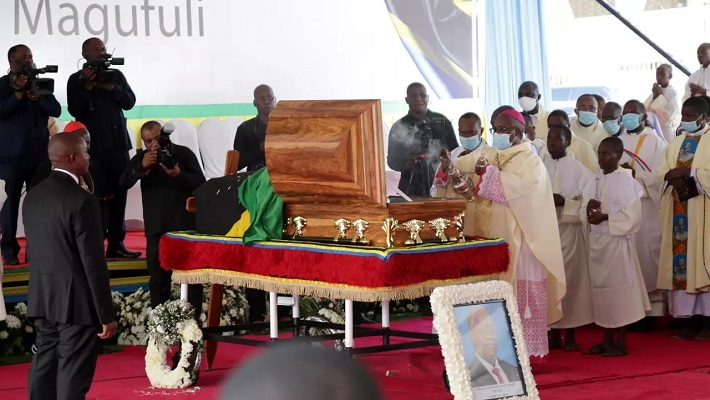 DAR ES SALAAM, MARCH 23, 2021 (CISA)-The Bishops of the Association of Member Episcopal Conferences in Eastern Africa (AMECEA) have described the late President John Pombe Magufuli of Tanzania as a visionary Catholic politician and a man of the people who stood for the poor.

“As bishops of AMECEA, we were proud to have a Catholic political leader who stood out as a man for the poor through his visionary and socio-economic agenda,” reads a statement by AMECEA Chairman Rt. Rev. Charles Kasonde.

According to the bishops, President Magufuli was not only a leader for Tanzanians but for the entire region.

“Beyond your country, this news has shocked the entire region which has lost a transformative leader whose presidency was characterized by zero-tolerance to corruption and socio-economic development,” the bishops said.

The bishops expressed solidarity with the Tanzania Episcopal Conference (TEC), Citizens and family of President Magufuli promising their unity and prayer for the repose of Magufuli’s soul, for his family and for the country.

The Tanzania Episcopal Conference termed Magufuli as a man with strong faith in God who lived his faith in the Church of Christ.

The President of Tanzania Episcopal Conference (TEC) Archbishop Gervas Nyaisonga, said the bishops received with great sadness the news of the death of President Magufuli.

“According to the truth of faith in Jesus Christ man created in the image and likeness of God is invited to share in eternal life as long as man has lived his faith… May the merciful and loving God reward our beloved John Pombe Joseph Magufuli the heavenly life he hoped for all his life here on earth…” the bishops said calling on the citizenry to maintain the good he has shown the region in his service.

President John Magufuli died on March 17 at Mzena Hospital in Dar es Salaam where he was receiving treatment for heart disease. He will be buried on Friday March 26 in in his ancestral home in Chato, Geita region.