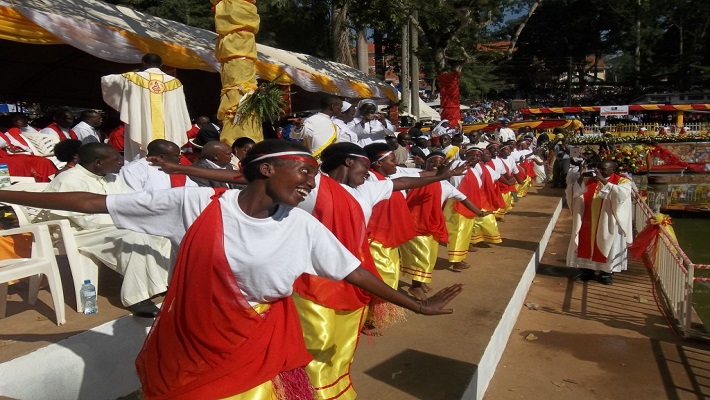 KAMPALA, JUNE 21, 2022 (CISA) – The Catholic Diocese of Jinja is slated to animate the 2023 National Celebration of Uganda Martyrs according to a statement by the Episcopal Conference of Uganda dated June 18.

At the plenary held at St Augustine Institute in Nsambya between June 6 and 11, the Ecclesiastical Province of Tororo was mandated to select the diocese to animate the event among which Moroto, Tororo, Kotido, Soroti and Jinja were available options.

The province after meeting settled on Jinja and consequently, the next year’s martyr’s day will be celebrated at Namugongo Shrine on June 3.

Bishop Antony Zziwa of the catholic diocese of Kiyinda-Mityana announced, “The Archdiocese of Tororo was chosen by the Uganda Episcopal Conference earlier this month to organize and animate the 2023 Uganda Martyrs day celebrations at the Namugongo Catholic Shrine. The task was left to the Archdiocese to choose between the Dioceses that will lead the celebration.”

The celebrations are usually organized on a rotational basis according to the four ecclesiastical provinces of the Catholic Church in Uganda.

At the plenary attended by Bishops, two Vicars general as Bishops representatives and a diocesan administrator, a report of this year’s National Celebration of the Uganda Martyrs animated at Fort Portal Diocese was tabled.

The National Celebration of Uganda Martyrs day is an annual solemnity observed by the Catholic Church in Uganda, on June 3 to honour the 22 Uganda Martyrs who were killed between 1885 and 1887 for converting to Christianity.

The martyrs whose execution was sanctioned by Kabaka Mwanga II, the then king of Buganda include Saint Charles Lwanga and Catechists, Blessed Daudi Okelo and Jildo Irwa from Paimol. They were beatified by Pope Benedict XV on June 6, 1920, and were canonized by Saint Pope Paul VI on October 18 1964.