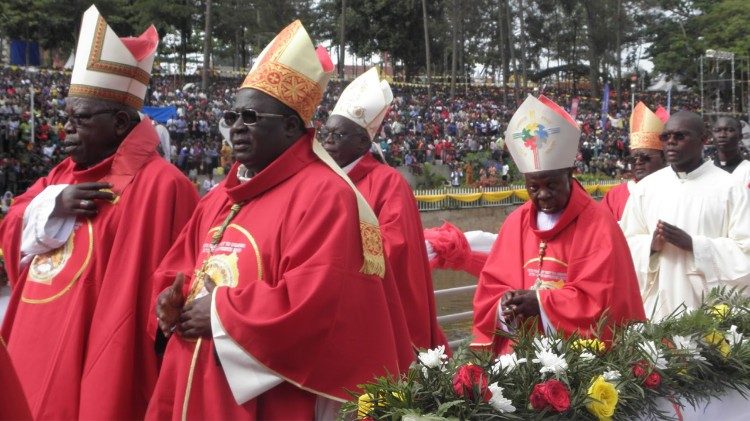 TORORO, JUNE 5, 2018 (CISA)-Blessed  Daudi Okelo and Blessed Jildo Irwa, the two young Catechists martyred in the course of evangelizing their relatives in Gulu Diocese, north of Uganda were recognized during this year’s martyrs celebrations held in Uganda.

“This two were beatified by Pope John Paul II,” said Archbishop Emmanuel Obbo of Tororo Archdiocese in his homily during this year’s martyrs day celebrations held in June 3 held at Namugongo Shrine.

In his homily, he also urged youths in Africa to take precaution and avoid being used by politicians and instead called upon them to stand firm and strong in faith as St Kizito, the youngest among the Uganda martyrs did.

“The youngest Kizito like others, demonstrated his readiness to die for Christ on that Ascension Day of Thursday, 3 June 1886. Before disappearing into the flames to be burnt alive with other Christians, he recited the ‘Our Father’ together with others,” he said.

He also appealed to the perpetrators of crime and evil especially in Uganda to embrace lives of the 22 martyrs.

“The search for quick money by hook and crook, including kidnapping, human trafficking, witchcraft and devil worship does not make the Martyrs proud,” he added.

Uganda has in the recent past been marred with high cases of kidnappings as a way of soliciting money from targeted families. This has instilled fear among families of losing their loved ones.

This year’s celebrations brought together hundreds of catholic pilgrims from all over the world with close to 2 million people attending Mass, as estimated by police.

More than 30 bishops and 200 priests drawn from all over the world joined the celebrations held in the Archdiocese of Tororo.