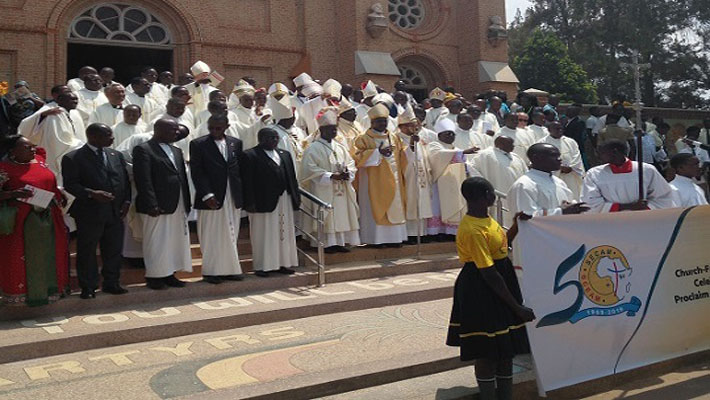 KAMPALA, MAY 17, 2019 (CISA)-The Symposium of Episcopal Conferences of Africa and Madagascar (SECAM) has confirmed its readiness for the Golden Jubilee Celebrations from July 19-29 in Kampala.

According to Bishop Joseph Antony Zziwa, the Chairman of the Uganda Episcopal Conference, 400 bishops from all the Episcopal Conferences in Africa and Madagascar and delegates from Africa, Europe, the US and  Asia, are expected to attend the celebration which will run under the theme, ‘Church, Family of God in Africa, Celebrate your Jubilee! Proclaim meet and welcome Christ your Savior’.

“The objective of the Jubilee is to celebrate in thanking God for His wonders and marvelous deeds, the gift of Baptism and of the Church, to ponder on the progress made so far, with the aim of deepening our roots in Christ and to engage ourselves resolutely in faith in proclamation of the mission of the Gospel in words and actions,” said Fr Joseph Koma-Koma, the Secretary General of SECAM.

Pope  Francis, will be represented by a delegation from the Vatican, which is likely to include the African Cardinals serving at the Holy See — Peter Turkson from Ghana, Robert Sarah from Guinea, and Archbishop Protase Rugambwa of Tanzania, who works as the Secretary for the of the Congregation for the Evangelization of Peoples at the Vatican.

On May 10, Bishop Zziwa launched a fundraising drive intended to raise about Ush 1 billion that is needed as part of the local church’s support towards organizing the celebrations and praised the role of the laity Christians in supporting the church.

During the fundraising launch, a total of Ush 180 million was raised in cash and pledges.

SECAM was launched in Kampala, in July 1969, by Pope Paul VI, during the first ever visit by a Pope to Africa.

According to the Uganda Episcopal Conference, SECAM was born out of the will of young African Bishops during the Second Vatican Council (1962-1965). They wanted to speak with one voice. The establishment of SECAM is therefore the result of the Bishops resolution to build a continental structure in order to bring forth the African vision to the whole Church.