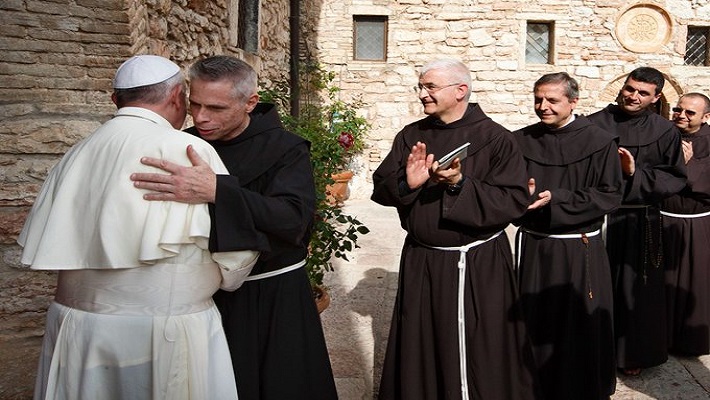 VATICAN, MAY 19,2022 (CISA) – In a move seen as “classical” Pope Francis steps against clericalism, the Holy Father has granted an exception to the Canon Law by authorizing the appointment or election of a brother to the office of Superior General in men religious communities made of both priests and brothers in a Rescript published by the Vatican on May 18.

“The Holy Father Francis, in the audience of 11 February this year to the undersigned Cardinal Prefect and Archbishop Secretary has granted the Congregation for Institutes of Consecrated Life and Societies of Apostolic Life the faculty to authorize, at the discretion and in individual cases, to non-clerical associates the conferment of the office of Major Superior in clerical religious institutes of pontifical right and in clerical societies of apostolic life of pontifical right of the Latin Church and dependent on it, notwithstanding can. 588 §2 CIC and the proper law of the Institute of Consecrated Life or of the Society of Apostolic Life, without prejudice to can. 134 §1,” read the Rescript of the Holy Father Francis regarding the derogation from can. 588 §2.

As a local superior a lay religious, “of an Institute of consecrated life or a Society of clerical apostolic life of pontifical right is appointed local superior by the supreme moderator with the consent of his council.”

However, a lay religious is appointed a major superior, “after having obtained a written license from the Congregation for Institutes of Consecrated Life and Societies of Apostolic Life,” and “at the request of the Supreme Moderator with the consent of the Council.”

The canonical reforms also stipulate that for a lay religious elected as “Supreme Moderator or Major Superior,” the process must be done “according to the modalities provided for by proper law, requires confirmation – by written license – of the Congregation for Institutes of consecrated life and Societies of apostolic life.”

According to the rescript, and in the cases aforementioned, a lay religious elected, “the Congregation for Institutes of Consecrated Life and Societies of Apostolic Life reserves the right to evaluate the individual case and the reasons given by the Supreme Moderator or by the General Chapter.”

Pope Francis also ordered that this Rescript be published in L’Osservatore Romano, and subsequently in the official commentary of the Acta Apostolicae Sedis, thus entering into force on May 18, 2022.

Canon Law 59, defines a rescript as “an administrative act issued in writing by a competent authority, by which of its very nature a privilege, dispensation or other favour is granted at someone’s request.” The Pope to write rescripts when asked to respond to a point of canon law