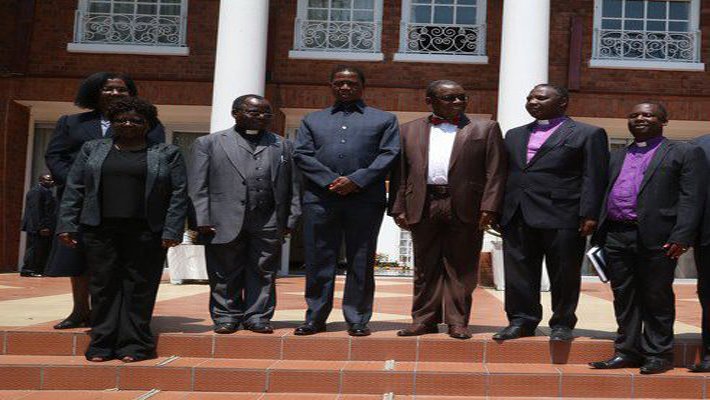 LUSAKA, JUNE 29, 2018 (CISA)-The church in Zambia has distanced itself from the ongoing debate on the National dialogue and reconciliation over who should lead the process.

“We refuse to be drawn into the discourse of who should lead the process and which other religious organizations should be part and parcel of the leadership in facilitating the dialogue and reconciliation,” reads a communiqué on national dialogue and reconciliation signed by Zambia Council of Catholic Bishops president Bishop George Lungu, Council of Churches in Zambia president Bishop Alfred Kalembo and Evangelical Fellowship of Zambia board chairperson Bishop Paul Paul Mususu.

The Bishops stated that they take responsibility of leading the dialogue process as a calling from God to reconcile the nation in order to bring peace and coexistence among Zambians.

The leaders assured that they are, “…aware that immense expectations and trust by the people have been put on the Church in Zambia to lead the much talked about dialogue and reconciliation process, and that the nation is going through a difficult period economically, socially and politically and that some of the root causes of the social economic problems emanate from disunity, continued state of political tension and the blatant lack of political will by our leaders to address the root cause of what is obtaining, and  that many public pronouncements have been made by various stakeholders regarding this dialogue process and how it should be moved forward.”

They believe that lessons have been learnt from the recent past in which political leaders failed to abide by what was agreed upon during the inter-party dialogue meeting held in the Cathedral of the Holy Cross on March 29, 2016.

“We further believe that the peace accord brokered in that dialogue meeting should have marked a new beginning. However, as you are aware, our leaders across the political divide failed to abide by the very commitments they make to end political violence, misapplication of the public order Act and electoral corruption. Because of this failure, the country is in this state of political division and socio-economic decline,” it concludes.