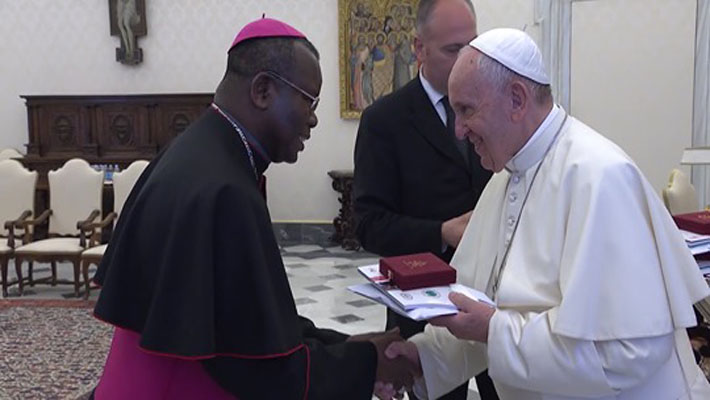 VATICAN, JUNE 21, 2019 (CISA)-Pope Francis has encouraged Bishops from the Episcopal Conference of Angola and Sao Tome (CEAST) to find pastoral solutions to some of the challenges within the region.

In their meeting on Monday June 17, during the ad Limina Apostolorum visit in Rome, Pope Francis asked the bishops not to wait for the Pope or some department of the Curia in the Vatican to come up with the answers to the challenges.

According to the CEAST Bishops, one of the biggest challenges facing their pastoral ministry is working in societies where the poor are getting poorer by the day, while the rich grow more prosperous.

“In a society in which almost sixty percent of the population is made up of Catholics, one of the most disconcerting challenges of our local Church is the increasing presence of aggressive and hostile sects who see the work of the Catholic Church as a threat,” Bishop Dionísio Hisiilenapo of Namibe told Vatican News.

Archbishop Gabriel Mbilingi, President of CEAST who was also present during the interview emphasized that the Church in the region is working flat out to promote and work for reconciliation, justice and peace, and to rebuild the social fabric of a society that is still reeling from conflicts that have since ended.

Archbishop Mbilingi who doubles as President of the Symposium of Episcopal Conferences of Africa and Madagascar (SECAM) also informed of the progress towards the SECAM Golden Jubilee to be celebrated from July 21 to 28 in Kampala, Uganda.

“The Jubilee of the 50th anniversary of this continental body will be celebrated in July, this year. The Golden Jubilee is for the Church of Africa to recommit to do better in the next 50 years,” he said.

SECAM was inaugurated in 1969 in Uganda by Blessed Pope Paul VI. It is an association of Bishops in Africa and is an institution of organic pastoral solidarity.

SECAM began in response to the call of the Second Vatican Council to the bishops to live the spirit of collegiality from the national, regional, continental and universal levels.