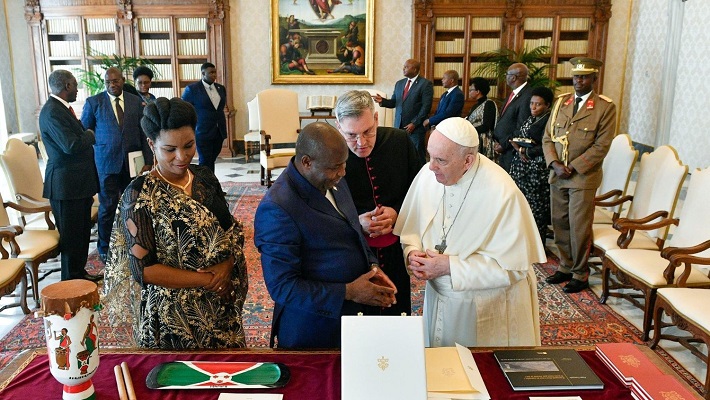 VATICAN CITY, MARCH 29, 2022 (CISA)-Pope Francis received in the audience, the President of the Republic of Burundi, His Excellency Mr Évariste Ndayishimiye, at the Apostolic Palace in the Vatican on March 26.

In an interview with Vatican News, President Ndayishimiye said he presented to Pope Francis Burundi’s national projects and the country’s socio-political situation and the reconciliation efforts underway among the Burundian people.

“Burundians are now working hand in hand as expressed in the country’s slogan, “Together everything is possible” (Ensemble tout est possible). We have created cooperatives where citizens work together. This also creates great social cohesion,” The president said noting that poverty is the only enemy the country is fighting.

Reflecting on the country’s past, President Ndayishimiye described Burundi as a country with a very painful history, littered with massacres, killings, social conflicts and violence, of which the people truly tired.

“In 2005, we started our journey towards restoring our society. We did not completely overcome these challenges because post-electoral tensions persisted even after 2005. But, in 2020, the transparent and democratic elections we held indicate our resolve to build a new democratic state. Those elections had no tensions and inspired a huge turnout of voters. Today, everyone says they are tired of the tensions. Everyone feels that it is time to fully rebuild our nation,” he emphasized.

“We need the Church to reconcile our people,” the President appealed to the Catholic Church to take part and inspire the march towards reconciliation.

President Ndayishimiye also took advantage of the trip to invite the international community to visit and witness “a changed country”. He stressed that Burundi today is not the same as it was.

“We are a country that is starting to develop and will no longer be distracted by conflicts. We want to live in peace with our neighbours and all other countries. I invite tourists to come and visit Burundi to see how this country that was in conflict is now a destination country,” said the President.

During his visit to the Vatican, the Burundi head of State also met with Cardinal Pietro Parolin, the Holy See’s Secretary of State and Archbishop Paul Richard Gallagher, the Secretary for Relations with States.