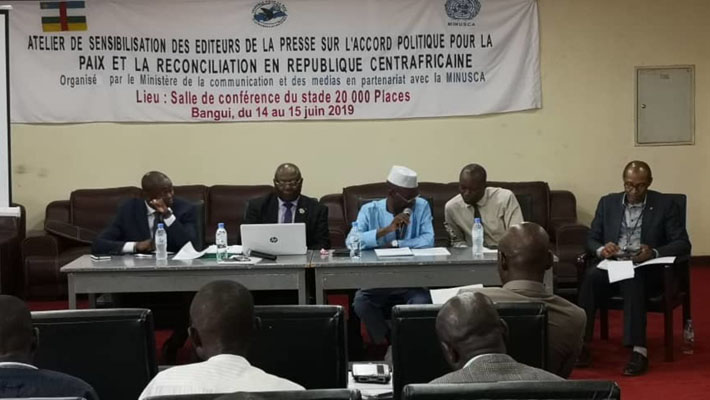 BANGUI, JUNE 21, 2019 (CISA) – United Nations Multidimensional Integrated Stabilization Mission the UN peacekeeping mission in the Central African Republic (MINUSCA) on June 14-15 organized a sensitization workshop for 40 press editors, on the implementation of the Political Agreement for Peace and Reconciliation in the Central African Republic (APPR-RCA).

The workshop held at the “20000 places” stadium in Bangui was opened by Hon. Ange Maxime Kazagui the Minister of Communication and Media was designed to reflect on the role of the media in the monitoring and implementation of the APPR-RCA.

“It is necessary to agree with the press on a minimum, especially the objectives, in order to communicate well on the Political Agreement of peace and reconciliation,” said Hon. Kazagui, emphasizing that journalists will play an essential role in the effective implementation of the Agreement.

At the workshop participants and panelists discussed the provisions of the agreement through examples of articles produced by media on the Agreement and its implementation.

Five months after the (APPR-RCA) was signed in February 2019, the government has been working towards its implementation with the aim of making it relevant to the citizens, with a view to its total success.

“The Mission reiterates its commitment to continue its support for the government’s public awareness and outreach campaign to appropriate the Political Accord as an opportunity for the parties to work together to end the crisis that has ravaged the country for several years,” said the Deputy Chief of Staff of the Special Representative of the Secretary-General, Souleymane Thioune.

According to MINUSCA, this workshop is the first of three awareness sessions for national communicators scheduled for June 2019.

The APPR-RCA’s main objective is to promote dialogue between the Government and armed groups, with a view to reaching a comprehensive consensual agreement to put a definitive end to the crisis in CAR.