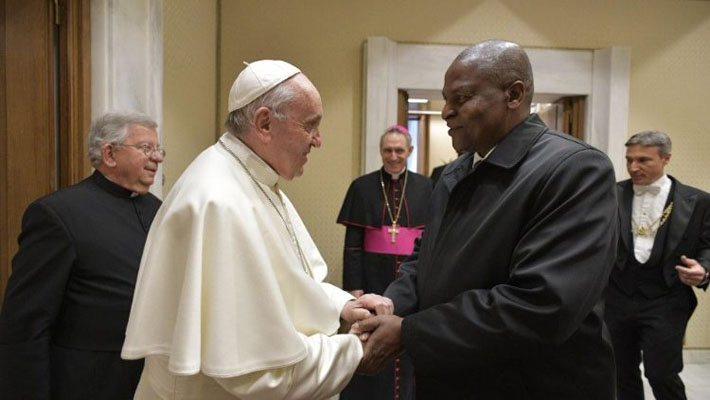 During the visit, they discussed among other things the Central African Republic’s recent Political Accord signed in February 2019.

“We are seeking peace, and in the agreement there are mechanisms which would allow us to continue to work… We are committed to ensuring that this deal can bring peace to the Central African Republic,” President Touadera told reporters after meeting Pope Francis.

Less than a month after it was signed, the Central African Republic’s peace agreement is under strain after five militia groups on March 4 either pulled out or rejected the make-up of the new government.

The peace pact, negotiated in the Sudanese capital of Khartoum before being signed in Bangui on February 6, brought together Touadera and the leaders of the 14 armed groups who control most territory in the African nation.

The meeting between the pope and Mr. Touadera came just two days after the inauguration of the Bangui Pediatric Hospital, constructed with the sponsorship of Pope Francis, for which president Touadera expressed his and the gratitude of the people of his country.

They also discussed the existing bilateral relations between the Holy See and the Central African Republic.

President Touadera also met with the secretary of Vatican State, Cardinal Pietro Parolin, who was accompanied by the Secretary for Relations with States, Archbishop Paul Gallagher.

During this occasion, the secretary of State gave President Touadera the Instrument of the Ratification of the Framework Agreement between the Holy See and the Central African Republic.

The Framework Agreement was signed on September 6 2016 in Bangui and concerns matters of mutual interest between CAR and Vatican. A communique from the Vatican later on March 12 announced the entry into force of the Framework agreement.