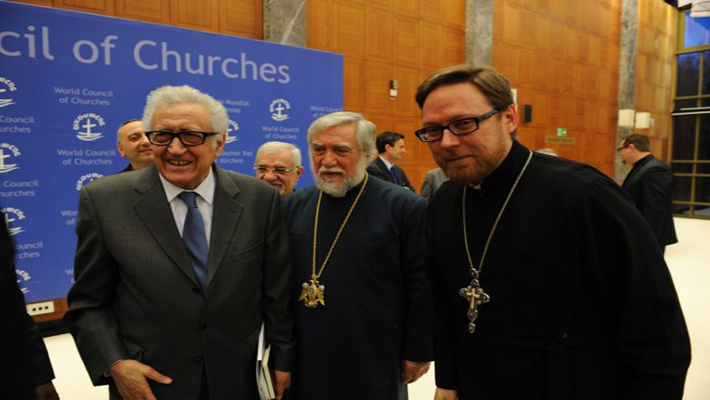 KINSHASA, AUGUST 24, 2018 (CISA)-The World Council of Churches (WCC) has lauded the ongoing preparations for the General Elections set for December 23.

“…we are pleased to know that significant steps are being taken in the right direction. We welcome the effort to correct the electoral files; the compliance until now to the major stages of the published calendar; especially the submission of candidatures for some in respect for constitutional democratic alternation and the commitment of the Government to finance the elections,” the Council said in its August 23 statement.

“We congratulate all stakeholders for these efforts and encourage them to move forward to ensure a successful election on 23 December 2018,” it added.

The statement comes after the ecumenical solidarity visit held from August 18 to21, where Rev. Dr Olav Fykse Tveit, General Secretary of the World Council of Churches noted that for the political crisis in the DRC to be solved, the success of the current electoral process is crucial.

The Council also noted with concern the issue of people enlisted without fingerprints; the need of consensus and trust on the use of the voting machine, the importance of fulfilling measures provided in the Saint Sylvestre Agreement, particularly the cases of prisoners and political exiles which are not yet resolved and the need to guarantee inclusiveness of elections.

They warned that if those issues are not taken into account, they may render in vain the efforts made towards the election.

“…Therefore, we strongly urge the National Independent Electoral Commission and the Congolese government to seriously address these issues by seeking the necessary consensus and by taking courageous actions in order to guarantee credible, transparent, inclusive and peaceful elections. This is very significant for the peace and the well-being of this beautiful and blessed country,” it said.

The General Secretary was accompanied by a delegation that included: Rev. Dr Frank Chikane, moderator of the WCC Commission of the Churches on International Affairs; Dr Nigussu Legesse, WCC programme executive; Bishop Arnold Temple, president of the All Africa Conference of Churches (AACC); Archbishop Onesphore Rwaje, AACC special envoy to the African Union; Rev. Prof. Bosela Eale, AACC director for Peace, Diakonia and Development; and a delegation from the Vatican in the Democratic Republic of Congo (DRC) composed of the Archbishop Protase Rugambwa, secretary of the Congregation for the Evangelization of the peoples in Vatican, Archbishop Marcel Utembi, president of the Episcopal Conference of the DRC, and Rev. Father Ildevert Mathurin Mouanga, rector of the Theological Seminary Emile Biayenda in Brazzaville, Congo.

According to the Council, the visit aimed to show solidarity with Congo during this “crucial turning point” in their history and to encourage them to stand firm in the way out of the current socio-political crisis.